Pakistan head coach Waqar Younis has cautioned his team of complacency ahead of the second T20 against New Zealand.

Karachi: Pakistan‘s head coach Waqar Younis has cautioned his players to be ready for a strong comeback from New Zealand in the second T20 international on Sunday after the green shirts won the first match in Auckland. “It is great to have this win under the belt. Finally to break the losing streak that started against England. But I still say New Zealand at home at a dangerous side and the second match is very important for us,” Waqar said from Auckland. The former Test captain and fast bowler told PTI that New Zealand were capable of bouncing back strongly and his players would have to be prepared for that. “The second match will be tougher for us,” he added. FULL SCORECARD: New Zealand vs Pakistan 1st T20I at Auckland

Waqar attributed today’s victory to a superb performance from captain Shahid Afridi. “It was his day, he led from the front in every department and when your captain is doing well than everything tends to fall into place and it inspires confidence in the players,” the Pakistan coach said. Waqar said that Afridi had always remained a dangerous player and, in recent months, had been focusing a lot on his cricket. “He has moved to Lahore, specifically to prepare with the other players for the World T20, and he has been training very hard. I think we are seeing the results in his batting, bowling and fielding,” said Waqar. ALSO READ: Welcome home, Mohammad Aamer

Waqar said Afridi remains passionate about winning the World T20 which could be his final appearance in international cricket. The Pakistan coach also praised the team for being organised and performing like a unit in different conditions. Waqar added,”We came here fresh from the defeats to England and there was pressure. I thought Mohammad Hafeez played brilliantly today as did Ahmed Shehzad.”

Afridi said he wanted the team to give its best and the rest would fall into place. “I think everyone did that today and it was a very encouraging performance from everyone. We all chipped in well today. New Zealand has been a dangerous limited over side and we were always wary when they were batting,” concluded Afridi. 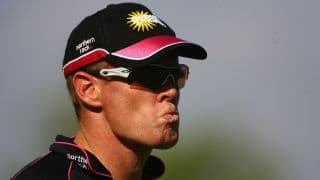 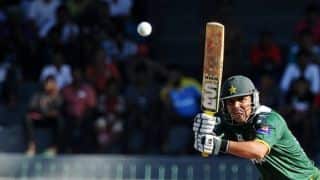