After successful win over Sri Lanka, New Zealand will play hosts to Pakistan for three One-Day Internationals (ODIs) and three Twenty20 Internationals (T20Is) starting from tomorrow. This will be Pakistan first home away series where they will take on New Zealand on the first T20I match at Khulna. New Zealand have started their year on a successful note with triumph over Sri Lanka on their 5 ODIs matches on leading by 3-2 and 2 T20Is matches winning both of them. Pakistan had a terrible experience with T20I series against England as they lost out on two games. While they did have good season with ODIs matches and Test matches against England, Zimbabwe and Sri Lanka. LIVE FULL SCORECARD: New Zealand vs Pakistan, 1st T20I at Auckland

Pakistan has the much controversial player Mohammad Aamer on their side and Umar Akmal who has recently been uplifted from the suspension for the first T20I is also likely to be playing for the match. Wahab Riaz is also confident that his side will come out stronger against the hosts this time. Pakistan’s Ahmed Shehzad feels his side comprises of junior as well as senior players which is important to balance out in the T20I games.

On the other end, hosts are going to miss out on Brendon McCullum as he has decided to stay away from international matches. Kane Williamson has been entrusted the responsibility of captaincy as he is confident he can take forward this responsibility along with his batting skills which has been renowned in the innings against Sri Lanka. Martin Guptill and Matt Henry have led the team to victory constantly that will be an advantage against the visitors as well. New Zealand domestic player Todd Astle is eager to make his debut in a larger match as this will build up his performance in the T20I games after his stint with domestic matches. ALSO READ: New Zealand vs Pakistan 2015-16, 1st T20I at Auckland Preview: Rampant hosts seek winning start

Both teams will want to play their best to win the T20I title as this will be only match for New Zealand ahead of ICC World T20I 2016 to be held in India. While Pakistan still have a chance to prove their stance in T20I matches in Asia Cup before ICC World T20 begins. The battle between these teams will surely be interesting to look forward.

Catch the live streaming of the second T20I at Auckland between New Zealand vs Pakistan on SKYSport.co.nz.

Live streaming has become an integral part of every sports fan’s life as he will want to be connected with the sport that he loves from anywhere in the world. That’s what live streaming enables you to do. He can access live streaming from any part of the world. All he needs is t have a good internet connection. He can watch the matches on his mobile, laptop or even his tablet. One must however be careful as many links may not lead him to the accurate page. Hence the user too must use his judgement to make sure that he has clicked at the correct link. 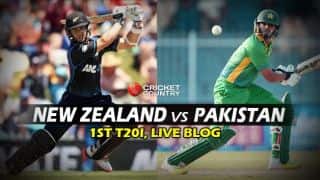 Twitterati troll Shikhar Dhawan as he continues his woeful form