New Zealand begin Day Two of the second Test on 77 for 2 against Pakistan at Seddon Park, Hamilton.

New Zealand begin Day Two of the second Test on 77 for 2 against Pakistan at Seddon Park, Hamilton. Rain had a huge say on Day One as it washed out over two sessions. The groundsmen tried their best to clear the water from the stadium, but it had rained too much for them to do that before the scheduled time. As a result play did not resume after lunch. Ross Taylor and Jeet Raval are at the crease on 29 and 35 respectively. They have added 38 for the third wicket off just 37 balls, sending out a message to the Pakistan camp after they took two quick wickets. Taylor was looking in excellent touch, smacking 6 boundaries in his 20-ball innings. FULL CRICKET SCORECARD: Pakistan vs New Zealand, 2nd Test at Seddon Park, Hamilton.

Raval, on the other hand, was more circumspect and played each delivery according to its merit. He carried on with his fine form from the Christchurch Test, where he had scored 55 and 36* in a low-scoring encounter; at stumps on Day One, his Test tally stands at 126 runs being dismissed only once.

However, Raval had a lucky break when he was dropped in slip by Sami Aslam off Mohammad Aamer in the very first over of the match. Aamer had his revenge off the final ball of the over, removing Tom Latham for a golden duck. This time Aslam held on to the catch, much to the relief of himself, Aamer and Pakistan. Latham thus earned the ignominious record of being the first New Zealand opener to register 3 golden ducks in Test cricket (he previously held this record jointly with Darrin Murray). It was also his second golden duck in three months.

Skipper Kane Williamson walked in at No. 3 and took 15 balls to get off the mark, and that included a difficult caught-and-bowled chance that Aamer could not hold on to. He was slowly getting himself set, but an excellent delivery from Sohail Khan saw him walk back to the pavilion. The ball caught Williamson on the crease, took the outside edge of the bat on its way to the wicketkeeper. The on-field umpire adjudged that not out, but when Pakistan reviewed, there was a spike on the Snickometer and Williamson walked away dejected.

Rain will have a say once again on Day Two. Showers are predicted on Saturday and Sunday as well. Even if the rain stops, play might not begin due to wet outfield, which was the case on Day One. New Zealand have depth in their batting and will look to get a good score, if and when play begins. They will ideally settle for a draw, which will give them the series 1-0.

Pakistan had won the toss and elected to bowl first. Both teams had made changes to their playing XI. Pakistan are without their skipper Misbah-ul-Haq, who has flown back to Pakistan after the passing away of his father-in-law, and are led by Azhar Ali. Imran Khan has come in place of Yasir Shah, while Mohammad Rizwan gets his Test debut in place of Rahat Ali. Yasir Shah has dropped to the bench, with Pakistan going in with a four-pace attack. With Mitchell Santner fit, Todd Astle dropped to the bench for New Zealand. On the other hand, Matt Henry replaced the injured Trent Boult. 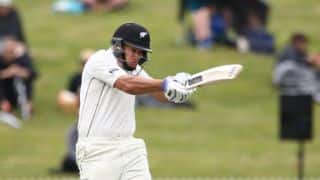