Matt Henry was expected to be elevated to share the new ball in Hamilton with Tim Southee, although New Zealand delayed naming their side until Friday's toss.

New Zealand suffered a blow on the eve of the second Test against Pakistan when bowling spearhead Trent Boult was ruled out on Thursday with a knee injury. Matt Henry was expected to be elevated to share the new ball in Hamilton with Tim Southee, although New Zealand delayed naming their side until Friday’s toss. New Zealand coach Mike Hesson revealed Boult had been troubled by “minor discomfort” in his left knee since the recent India tour and irritated it further in the first Test against Pakistan which New Zealand won by eight wickets. Full cricket Scorecard: Pakistan vs New Zealand 2nd Test at Hamilton

“We were optimistic he would be ready for Hamilton, but during training on Wednesday felt further pain and has subsequently been ruled out of the Test,” Hesson said. With the Seddon Park wicket in Hamilton expected to produce more swing that Hagley Oval did for the first Test, Doug Bracewell has been added to the New Zealand squad.

Senior batsman Ross Taylor confirmed he will undergo surgery next Wednesday, immediately after the Test, to remove a growth in his left eye. The 77-Test veteran, who was confirmed to play Wednesday after consulting an eye specialist, has been in poor form, amassing only 103 runs in his past 10 innings. Taylor said although the growth did not affect his sight it was distracting mentally “when you play and miss the first couple of balls.”

After consulting a range of optometrists and specialists, Taylor was confident next week’s operation would clear the issue up. “In any operation there’s a chance things won’t go as well as possible but the surgeon I talked to last night was pretty confident,” he said. Taylor also revealed he had the growth for more than five years but it had worsened in the past year. “In all the Tests I still had very good vision, It’s just I guess the growth has come across. The only thing you can really do is wear sunglasses and put eyedrops in,” he said. 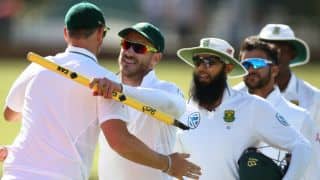