New Zealand take on Pakistan on Day Two of the first Test of the two-Test series at the Hagley Oval in Christchurch. The entire first day’s play was washed out due to persistent rains as even the toss did not take place. The live cricket streaming of the match is available for free on skysport.co.nz, while the live telecast of the match is available in New Zealand on Sky Sports. Pakistani viewers can catch the action on Ten Sports, Geo Sports and PTV Sports. New Zealand are coming off a 3-0 loss to India, while Pakistan, on the other hand, are coming on the back of a brilliant 2-2 draw against England in England, and a keenly contested series versus West Indies in UAE, that ended with a scoreline 2-1 in favour of hosts, Pakistan. FULL CRICKET SCORECARD: Pakistan vs New Zealand, 1st Test at Hagley Oval, Christchurch

The young Pakistan side under the inspirational leadership of Misbah-ul-Haq has grown in confidence and a tour of New Zealand followed by the one of Australia will be a litmus test for them. While Misbah and Younis Khan will continue to guide the side with their experience, the likes of Mohammad Aamer, Yasir Shah, Sarfraz Ahmed, Asad Shafiq and young Babar Azam promise a lot for the future. They will, however, be tested under testing conditions of New Zealand which will favour swing and seam.

New Zealand, the hosts of the two-Test series, have plenty to ponder ahead of their home series. After a string of losses, they are under tremendous pressure to do well at home. New Zealand have dropped Martin Guptill, Doug Bracewell, Jeetan Patel, Luke Ronchi, Mitchell Santner, Ish Sodhi and Mark Craig coning into this series. Keeping the conditions in their country in mind, the spin brigade has been either dropped or rested.

The series promises to unearth new challenges for both sides and witness some exciting contest between players from both dens. While Pakistan will be eager to keep their impressive record intact (they have not lost a Test series in New Zealand since 1985), New Zealand will be eager to come back to winning ways after their last series win, that too, against minnows Zimbabwe.

The match will start early to compensate for the loss of overs on Day One as even the toss did not take place. Hopefully, the spectators and supporters of both sides will have something to cheer about with live action from Christchurch. 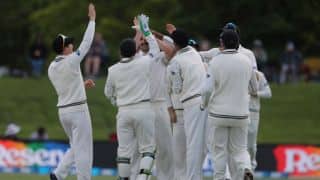