New Zealand take on Pakistan on Day Three of the first Test of the two-Test series at the Hagley Oval in Christchurch. The entire first day s play was washed out due to persistent rains but cricket lovers got action on Day Two as New Zealand won the toss and opted to bowl on a green turf with overcast conditions. Everything went in New Zealand’s favour as Pakistan was left shell shocked courtesy deadly spell by debutant, Colin de Grandhomme. Grandhomme left Pakistan shattered to dismiss them for 133 and in reply Kiwis are standing at 104 for 3. The live cricket streaming of the match is available for free on skysport.co.nz, while the live telecast of the match is available in New Zealand on Sky Sports. Pakistani viewers can catch the action on Ten Sports, Geo Sports and PTV Sports. LIVE CRICKET SCORECARD: Pakistan vs New Zealand, 1st Test at Hagley Oval, Christchurch

Losing the toss and coming out to bat was always going to be difficult for Misbah-ul-Haq’s batsmen but they would have never expected such a tame surrender to give Grandhomme a grand entry into Test cricket. The right-arm fast bowler ended with 6 for 41 in 15.5 overs to send Pakistan packing in series opener.

Only four Pakistani batsmen in form of Misbah, Sami Aslam, Azhar Ali and Asad Shafiq could boost a score in two digits as rest of the dependent line-up faltered. Misbah was the lone warrior, as has been the case since time immemorial, with a fighting 31 but sadly was not enough to bail his side from embarrassment.

Pakistan came out to bowl in the final session of day’s play and grabbed three wickets. Nonetheless, Kiwis have their tail up as Pakistan’s 133 is never going to be challenging to a side who bat deep. Jeet Raval, who has been called for struggling opener Martin Guptill, carried his bat till stumps and notched up 55 (unbeaten) to take New Zealand to three figures. New Zealand, however, lost in-form opener, Tom Latham, skipper Kane Williamson and Ross Taylor but Henry Nicholls looked confident with 29 not out on board.

New Zealand will be expected to bat for long and get a big lead to dominate their opponents in the coming days as they are trailing by only 29 runs. Pakistan, on the other hand, will expect one of their prime bowlers to bowl a similar kind of spell like Grandhomme so that they are not completely out of the game. 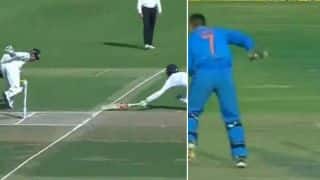