Bad light won and the game was called off 9 minutes prior to the original cut-off time. Till then, Elgar and Amla had managed to put their team 5 runs ahead of hosts.

South Africa, in their second innings, finished Day Three 38 for 1 managing to get 5 runs lead over New Zealand in the first Test at University ground, Dunedin. Having gained a 33-run lead in first innings, Trent Boult rammed South Africa with Stephen Cook s (0) wicket on his fourth delivery of first over. First innings centurion Dean Elgar (12*) and Hashim Amla (23*) battled out till the day was called off to see Proteas coming off the field with a slender lead and more importantly, not losing any wicket despite the bad light and probing spell from Kiwi bowlers. LIVE CRICKET SCORECARD, New Zealand vs South Africa, 1st Test at Dunedin

Moments within the third and final session of the day, New Zealand were bowled out for 341 – thanks to some huge hitting from Neil Wagner (32 off 32) and Ross Taylor (15*) the Kiwi veteran who limped off the field yesterday suffering low-grade calf tear. It was dicey if he would come out to bat, but when Trent Boult was clean bowled, Keshav Maharaj saw Taylor coming to bat amidst huge cheering from the crowd. Before the entire New Zealand innings ended, Taylor smashed one six over deep square leg to Morne Morkel on the very first ball he faced. Eventually, Wagner was caught by JP Duminy off Maharaj s bowling gifting the spinner his maiden five-for.

The lead of 33 runs was not a big one at all, but the Kiwi quicks looked lethal. Boult, who had taken 4 wickets in the first innings, started off the proceedings with accurate bounce and swing, pitching the ball in correct areas and thus catching Cook in the corridor of uncertainty every time. The fourth ball he bowled was little outside off and nipped away from the batsman, but Cook tried to drive and managed a tickle enough to be heard. The umpire had no doubts and raised the finger. Cook too, walked back without a blink.

But to everyone s amusement, RTS and Hotspot could not find any edge in the replays. Sums out that Cook had hit his pad while attempting to drive and the ball had gone past the bat inches wide. But the Kiwis were soaring high and amidst this Amla walked in who was dismissed for just a single in the first innings. Wagner and Boult bowled in tandem but Amla, utilising all his experience, counterattacked both the Kiwi pacers and used their pace to send the ball past boundary rope.

There was overall good cricket going on in the middle giving a subtle hint of something about to happen. It did happen but outside the pitch where the fire buzzers went humming non-stop. This created chaos which took almost 20-25 minutes to calm down. The game was to be played extra 30 minutes to make up for the loss of play.

Only spinners were asked to be deployed as the light was not sufficient enough to spot the deliveries from Boult or Wagner. Jeetan Patel and Mitchell Santner bowled in 4 and 5 overs respectively but could not get any breakthrough despite the ball bouncing and turning.

Eventually bad light won and the game was called off 9 minutes prior to the original cut-off time. Till then, Elgar and Amla had managed to put their team 5 runs ahead of hosts.

Initially, the day started off with Kane Williamson scoring his 16th Test century, helping his side reach close to South Africa s first innings total of 308. Williamson (130) led a lone-wolf battle but perished while trying to up the ante. But BJ Watling, the Kiwi wicketkeeper, registered a gritty fifty off 127 deliveries to propel New Zealand in the corridor of 300-run mark and eventually getting bowled out for 341.

In all this batting effort for New Zealand, Maharaj who is playing his 5th Test, got his maiden 5 for. He got in the groove towards the start of Day Three. Initially, Williamson and Jeet Raval (52) had milked him dancing down the wicket. But on the third morning, he varied his pace well and pitched the ball in areas that produced juicy bounce and turn resulting in wickets. 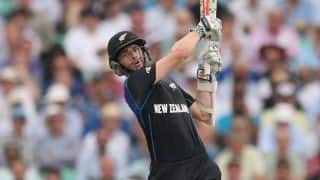 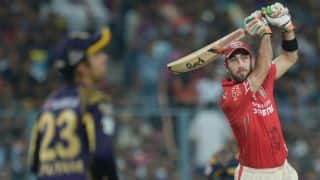