The live cricket streaming of Day 3 of New Zealand vs South Africa 2016-17, 3rd Test, will be available on OSN Play, Foxtel Go and SKY GO.

With the the series already leading in favour the visitors, host New Zealand get set to face off against South Africa, ion Day 3 of the third and final Test at the Seddon Park in Hamilton on Monday. The live cricket streaming of Day 3 of the match will be available on OSN Play, Foxtel Go and SKY GO. As for the live cricket telecast, it will be available on Sky Sport 1 in New Zealand, Fox Sports 2 in Australia, SuperSport in South Africa, Sky Sports in United Kingdom (UK) and OSN Sports in the Middle East. Unfortunately, there is no official live telecast or live streaming of the match available in India. Full Cricket Scorecard: New Zealand vs South Africa 2016-17, 3rd Test at Hamilton

South Africa, who were 190 for 6 in the first session, saw 124 runs added with one man bringing 90 from it. New Zealand did show their calibre on-field with few stunning catches by one man but the bowlers who ruled the day on Saturday, were seen conceding way too many runs. Kane Williamson is also to be blamed for under using Mitchell Santner who was given just 9 overs, from which he bowled 3 maidens and bagged a crucial wicket of South Africa captain Faf du Plessis in his first over. Jeetan Patel, on the other hand, who has secured 5 wickets so far in the series, went wicketless in conditions tailor made for him.

The South African think-tank will need to come up with ways to stop the flow of runs and look for quick wickets. Also this being a happy hunting ground for Philander, where he claimed his career best figures of 6 for 44 and match figures of 10 for 114 in 2012, a lot will be expected from the all-rounder on Day Three. 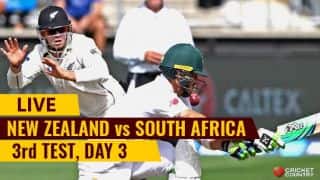 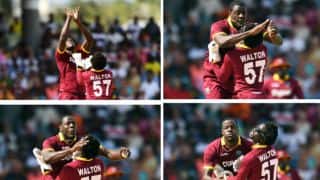