The greener the better in Wellington has been New Zealand's mantra in the past. But their tone has been softened for the second Test starting Thursday.

After four days of rain the covers were peeled off the Basin Reserve wicket on Tuesday and to South Africa’s delight it was green ahead of the second Test against New Zealand. The greener the better in Wellington has been New Zealand’s mantra in the past. But their tone has been softened for the second Test starting Thursday, given the ruthlessness of South Africa’s pace trio Vernon Philander, Kagiso Rabada and Morne Morkel. New Zealand’s situation is not helped by the loss of batsman Ross Taylor and injury concerns surrounding fast bowler Trent Boult who has until Wednesday evening to prove his fitness. FULL CRICKET SCORECARD, New Zealand vs South Africa, 2nd Test at Basin Reserve, Wellington

“I don’t think ideally we want to play South Africa on a seamer friendly surface,” said coach Mike Hesson, who was satisfied with the efforts of his twin-spin attack in the first Test where New Zealand had a chance until rain ensured a frustrating draw on the final day. South African captain Faf du Plessis, however, could barely contain his excitement at the state of the wicket and New Zealand’s injury woes.”We’ve been surprised. New Zealand conditions have changed since we were last here,” he said, with South Africa confirming they were bringing in an extra spinner — Dane Piedt — for the third Test in Hamilton next week.

But with the Basin Reserve having it’s traditional green cover, du Plessis said his seamers were looking forward to the second Test. The loss of Taylor means captain Kane Williamson is New Zealand’s sole batting figurehead and “if we get through him we can put some real pressure on their batters. So there’s excitement for our seamers and they will enjoy that, but so will New Zealand, they’ve got a good seam attack depending on Boult’s fitness,” added the South African skipper. The captain who wins the toss is expected to bowl which puts the odds in South Africa’s favour after they called correctly in all five ODIs and the first Test. Preview: Injury laden New Zealand eye win against in-form South Africa

New Zealand have replaced the injured Taylor with 33-year-old Neil Broom who did not have the happiest time in the one-day series against South Africa. In three innings he had scores of two, two, and a duck and was caught around the wicket at square leg, point and in the slips. But, although Broom has yet to play a Test, Hesson believes he has enough experience to make the grade. “We have quite an inexperienced batting line up, so we were keen to have somebody who had plenty of playing experience, somebody who played pace well and obviously Neil has the advantage of seeing a bit of South Africa earlier on,” he said.

Tim Southee is expected to return after being sidelined to make way for an extra spinner in the opening Test at Dunedin, and Matt Henry has been added to the squad and is likely to play if Boult is ruled out. Fine weather is forecast throughout the second Test apart from Saturday when strong southerly winds and some rain are expected. 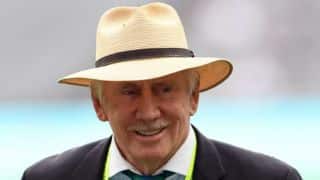