Hosts New Zealand will lock horns with South Africa in the fifth and final One-Day International (ODI) of the ongoing series on Saturday.

Hosts New Zealand will lock horns with South Africa in the fifth and final One-Day International (ODI) of the ongoing series on Saturday. The match will be played at Eden Park, Auckland. The live cricket streaming of the match will be officially available on OSN Play, Foxtel Go and SKY GO. As for the live telecast, it will be available on Sky Sport 1 in New Zealand, Fox Sports 2 in Australia, Supersport in South Africa, Sky Sports in United Kingdom (UK) and OSN Sports in the Middle East. The match will decide the fate of the series which is currently levelled. FULL CRICKET SCORECARD: New Zealand vs South Africa, 5th ODI at Auckland

Both nations won a match alternatively and kept the series alive to go down till the last match. New Zealand won the fourth ODI as they chased down 280. Opener Martin Guptill came back into the side and played a blistering knock of unbeaten 180 to cruise his side to the victory. Earlier, South Africa had put up a competitive 279 for 8 at the end of their innings. While Hashim Amla scored a good 40 opening the innings, Faf du Plessis 67 and AB de Villiers 72 were among the major contributions towards the team total. For New Zealand, Jeetan Patel was the highest wicket-taker with a couple of wickets.

The chase was more of a Guptill-show for his record-breaking knock. However, Ross Taylor too played a crucial knock as he added 66 runs. Imran Tahir was the highest wicket-taker for South Africa with 2 wickets. New Zealand won the match by 7 wickets with 5 overs still remaining. 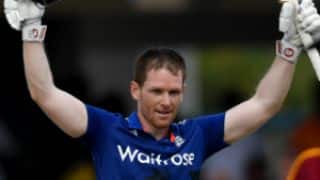