Mahela Jayawardene, scored his 77th One-Day International (ODI) half century and he along with Kumar Sangakkara batted Sri Lanka out of trouble after the early wicket of Dimuth Karunaratne. Jayawardene’s fifty took just 55 balls. The fourth ODI of seven-match series against Sri Lanka is being played in north-west of New Zealand, to the city of Nelson, with the teams level at 1-1. Batting first Sri Lanka reached for 218 for four at the end of 41 overs.

Earlier on a bright sunny day at Nelson, Sri Lankan skipper Angelo Mathews won an important toss and decided to bat first in this crucial encounter. New Zealand side have made three changes for this game. Kane Williamson, Grant Elliott and Adam Milne have come in place of Tom Latham, Nathan McCullum and Mat Henry. 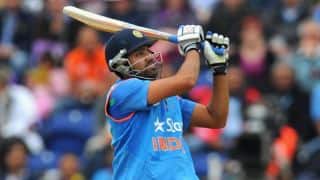