For the Sri Lankans, the top-order batting managed to live up to its expectations.

New Zealand and Sri Lanka face off for the fifth encounter of the seven-match One-Day International (ODI) series at the University Oval in Dunedin on Friday. The series currently stands at 2-1 in favour of New Zealand, who managed to gain the lead courtesy their four-wicket victory over the Lankans in the fourth one-dayer that was played at the same venue.

It has been a disappointing tour for the Sri Lankans so far, who travelled to New Zealand in order to get acclimatised to the playing conditions of the country which will be co-hosting the upcoming ICC Cricket World Cup 2015 along with Australia. While they were whitewashed 0-2 in the Test series, they lost the first ODI at Christchurch by three wickets. The good press that they managed earn by clawing back into the series with a resounding six-wicket victory in the second game in Hamilton was undone by the defeat in the fourth game [the third match was washed out].

For the Sri Lankans, the top-order batting managed to live up to its expectations as Sri Lanka reached a score of 180 for the loss of two wickets at one stage. They looked set to finish on a total in excess of 300, which would have been likely had it not been for the wickets that the visitors lost in a heap towards the latter stages of their innings.

The bowling attack too could not capitalise on the early wickets that they had managed to get, reducing New Zealand to 63 for three. It was Kane Williamson who rescued the Kiwis once again, hitting six boundaries and a six during his innings of 103 off 107 deliveries, his fifth ODI hundred. The New Zealand middle-order too is showing signs of improvement as it rallied around Williamson’s ton in the rescue effort. Grant Elliott and Corey Anderson’s knocks of 44 and 47 respectively played their part in guiding New Zealand home.

New Zealand have so far proved that they are indeed a tough side to beat in their conditions, and that they are top contenders for the upcoming World Cup. Sri Lanka, on the other hand will look to put the Test defeats behind and keep their focus maintained in the ongoing series, which is technically anyone’s for the reckoning. 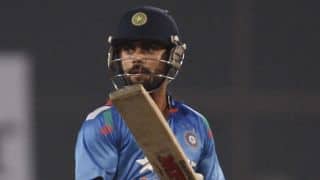