One would've expected New Zealand to steamroll Sri Lanka on Day 2 but Kumar Sangakkara had other plans.

The Sri Lankans put up an amazing show on Day 2 with the bat in stark contrast to Day 1 where stumps were called at the fall of the fifth wicket for a paltry score of 78. Earlier in Day 1 New Zealand were skittled out just 221. The pitch had a healthy grass cover and conditions overall were conducive to pacers.

Sri Lanka’s top order failed miserably as the openers went cheaply and exposed a misfiring middle order. Dimuth Karunanratne who looked relatively confident at the crease soon became uncomfortable as the New Zealand seamers started settling to make better use of the swinging conditions. Kaushal Silva at the other end appeared extremely edgy right from the word go.

Silva soon fell for just 5 runs off 30 balls and Karunanratne followed him to the hut after scoring 16 off 25 deliveries. The next to fall was Lahiru Thirimanne without troubling the scorers. When the man-in-form and skipper Angelo Mathews fell for 15 it appeared as if all hope was lost for Sri Lanka.

However, Kumar Sangakkara who came into the match just 5 short of the 12,000-run milestone started looking fluent once he got to the mark. Prasanna Jayawardene who walked in to replace Mathews couldn’t provide much resistance in face of some class bowling from Doug Bracewell and became his third victim of the day.

Coming in to Day 2, one would’ve expected New Zealand to continue in the same vein to steamroll Sri Lanka but Kumar Sangakkara had other plans and was adequately assisted by Dinesh Chandimal. The batsmen negotiated the early overs, scoring at a slow rate but gradually got settled and then the runs came effortlessly.

Sangakkara notched up his 38th Test ton even as Chandimal at the other end got to a half-century. New Zealand finally managed to break the stand as James Neesham snared the wicket off Chandimal at 67 but damage was done for New Zealand. Sangakkara at the other end had no intentions to return to the hut however as he continued to bat fluently with the tail-enders and took his score 203. Rangana Herath and Dhammika Prasad put in handy contributions of 15 and 11 respectively.

The New Zealand bowlers allowed the game to drift away. They appeared tired and frustrated at their inability to get a wicket on the second morning. Sri Lanka finally ended up with a score of and took a lead of  135. Tough job ahead for New Zealand in attempt to claw back into the game. 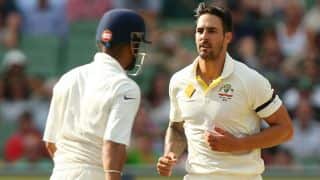