Sri Lanka have one last chance is they are to keep the series alive.

New Zealand and Sri Lanka face off in the sixth One-Day International at the University Oval in Dunedin on Sunday. New Zealand gained a 3-1 series lead after a 108-run win in the fifth one-dayer, played at the same venue on Friday.

Dunedin would vociferously demand an encore from New Zealand and Sri Lanka when the teams meet. If the cricket fraternity wasn’t satisfied with AB de Villiers’ blitzkrieg against West Indies, Luke Ronchi ploughing into the Sri Lankan bowling attack in the fifth ODI would have come as a source of boundless pleasure.

Naturally records fell like nine pins in the process. Grant Elliot contributed to the carnage with a relatively subdued century, sharing the highest six-wicket partnership in the history of ODI cricket with Ronchi. 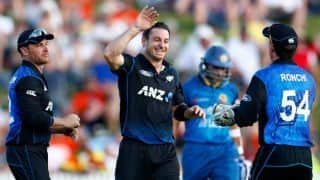