Matt Henry was adjudged Player of the Match.

New Zealand have won the first ODI at Christchurch against Sri Lanka (of the five-match limed-overs series) convincingly by seven wickets with 39 overs remaining. Sri Lanka won the toss and elected to bat first but right-arm medium-pace bowler Matt Henry broke their top-order dismissing Tillakaratne Dilshan, Lahiru Thirimanne, Dinesh Chandimal and Angelo Mathews cheaply for just nine, one, five and naught. If it was not for Milinda Siriwardana and Nuwan Kulasekara’s 66 and 58-run knocks respectively, Sri Lanka could had bowled out for under 100 runs. Doug Bracewell also chipped in with three wickets. However, Sri Lanka did manage to reach 188 in 47 overs. BLOG: New Zealand vs Sri Lanka 2015-16, 1st ODI at Christchurch

In reply, New Zealand riding on Brendon McCullum’s 55 off 25 odd balls and Martin Guptill’s 79 in only 56 deliveries chased down the target in 21 overs itself with seven wickets remaining. Henry Nicholls took New Zealand to victory in style by smashing the last two balls of the 21st over for boundaries. With this thumping win, New Zealand go one up in the ODI series. Matt Henry was adjudged player of the series; his stats read an impressive 10-1-49-4. For Sri Lanka, only slow left-arm bowler Milinda Siriwardana showed any promise in the match. He took two wickets in five overs. However, even Siriwardana was not spared by the kiwis. He went for 45 runs at an economy of nine. 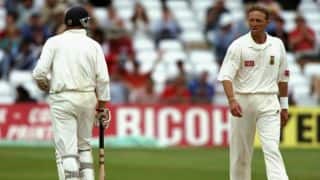 South Africa vs England 2015-16: Old Trafford 1998 and other memorable Tests between the two rivals