Henry Nicholls is in line to make a debut on his One-Day International (ODI) on Saturday at Hagley Oval and he will be much familiar with the surroundings as he has played many domestic matches on the same ground. Nicholls will make debut in either of the first two games of the five match ODIs series as the team is to juggle without their injured all-rounders like Corey Anderson, James Neesham and Grant Elliott. Kane Williamson is also doubtful to play due to his knee injury. Williamson scored 108 not out to lead New Zealand to a five-wicket victory in the second Test in Hamilton earlier this week. ALSO READ: Trent Boult left out for ODI series against Sri Lanka

Test batsman Tom Latham has been kept on a standby for the squad. As mentioned on ibnlive.com, New Zealand coach, Craig McMillan spoke to Fairfax Media and said, “We’re just working through that knee. It’s just a little bit niggly so we want to make sure it’s a hundred per cent. We’ll see how he feels. We need to get it right, if a little bit of a break will help it that’s something we’ll consider.” If Williamson doesn’t pass the fitness Test, Nicholls will be an easy replacement in the squad as number three batsman. Nicholls has performed well at the same ground for domestic cricket. ALSO READ: New Zealand extremely excited about playing day-night Test vs Australia, says Craig McMillan

McMillan said, “He’s certainly in the mix when you look at our line-up. I don’t think there’s any better place to make your debut than at home. He’s played a lot of cricket here. It would probably ease the tension a little bit when you know you’re on a ground that you’ve played well at before. His progression over the last 24 months has been excellent; he’s matured in a lot of areas in terms of his game. His white ball cricket has certainly improved over the last two years. (And) it’s always been a belter here. The batters should have a smile on their face.” ALSO READ: Kane Williamson should succeed Brendon McCullum as New Zealand captain, says Daniel Vettori

Nicholls entry in the squad can also be eased out as Sri Lanka’s fast pace bowler Lasith Malinga has been ruled out for the 1st ODI. The 32-year-old bowler has been suffering from knee injury since October and they announced that he will not play the ODI on Saturday. Thisara Perera will be included as his replacement to play against New Zealand. Sri Lanka’s team manager spoke to espncricinfo.com, “He has not come for the ODIs. He’s feeling some discomfort in his knee. Whether he will come between the ODIs and T20s – no one knows.” 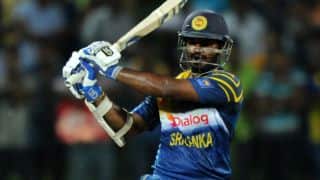