New Zealand take on Sri Lanka on Day 4 of the first of the two-match Test series at the University Oval in Dunedin.

New Zealand will face off with Sri Lanka of Day Four of the first Test at Dunedin with a strong belief that they can win the game. They are currently leading by 308 runs and have lost only one wicket. It is likely that Sri Lanka will have a very unmanageable fourth innings score to chase and for them the aim will be to peg New Zealand back in the third innings with frequent wickets so as to delay the declaration as far as possible. In this scenario, the biggest threat for Sri Lanka will be Brendon McCullum who will come out all guns blazing if he happens to bat. Full Cricket Scorecard: New Zealand vs Sri Lanka 2015-16, 1st Test at Dunedin

Kane Williamson and Tom Latham are the two overnight batsmen and Latham is batting undefeated on 72 while Williamson was two short of his fifty. Latham will hope to get to his third Test hundred of his career, while Williamson has already completed a far greater milestone in the game. Coming to bat in this innings, he needed just eight runs to become only the second New Zealand batsman to score over 1,000 Test runs in a calendar year and has already surpassed that mark by 40 runs.

All odds look stacked in favour of the hosts. But Sri Lanka, must continue to give it their best fight. If they can trigger a flurry of wickets early in the day they could cause some reason for panic in the New Zealand dressing room. Their fast bowlers have been good but just need to finetune their accuracy a little bit more and the conditions will do them good in endeavour to take some wickets. If they pick early wickets it could be quite an interesting scenario. 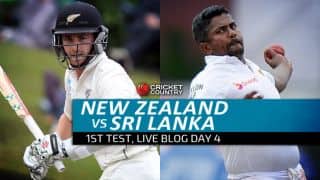 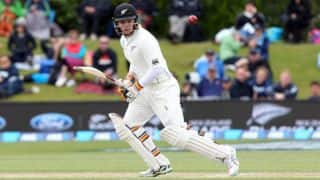