New Zealand will look to wrap up the game as quickly as possible in order to minimise chances of rain denying them.

Tim Southee took two wickets as New Zealand tightened the screws on Sri Lanka on the fourth day of the first Test today, but rain threatened to derail their victory hopes. New Zealand captain Brendon McCullum set the stage for a close finish at Dunedin with a sporting declaration that offered Sri Lanka more than five sessions to reach a 405-run target. At the draw of stumps, Sri Lanka scored 109 for the loss of three wickets in their massive chase of 405-run target, thereby needing 296 more runs for the victory. The tourists’ response was disrupted by three stoppages as southerly squalls swept across the ground. Further showers are forecast for the final day. Live Cricket Scorecard: New Zealand vs Sri Lanka 2015-16, 1st Test at Dunedin

Dinesh Chandimal (31) was at the crease and will resume the innings tomorrow with skipper Angelo Mathews on the final day of the Test match. Visitors had a reasonable start to their chase as openers Kusal Mendis (46) and Dimuth Karunaratne (29) provided some resistance by producing 54-run partnership before becoming the victims of Southee. Udara Jayasundera (3), who came at number three, was unable to spend much time at the crease and was scalped by Neil Wagner.

Earlier, Resuming at the overnight score of 171-1, the hosts declared their second innings for 267-3; with opener Tom Latham and Brendon McCullum unbeaten at their respective scores of 109 and 17. Kane Williamson also made a significant contribution, playing an innings of 71 runs, which included seven boundaries.

For Lanka, Rangana Herarth claimed two wickets while Dushmantha Chameera also chipped in with a wicket. 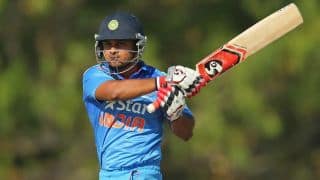