New Zealand will look to put in another good performance and wrap up the series 2-0.

New Zealand lock horns with Sri Lanka in the second Test at Seddon Park, Hamilton. New Zealand lead the series 1-0, courtesy of their 122-run win in the first Test at Dunedin. Martin Guptill was the star for New Zealand in the first innings as his 156 helped his side post a score of 431. Kane Williamson played his part to with a majestic 88, but Brendon McCullum hogged the spotlight as he struck a blistering 57-ball 75 and demolised all the bowlers along the way. For Sri Lanka, it was Nuwan Pradeep, who picked up four wickets with Suranga Lakmal and Dushmantha Chameera chipping in with a couple of wickets each. Live Cricket Scorecard: New Zealand vs Sri Lanka 2015-16, 2nd Test at Hamilton

Sri Lanka were bowled out for 294 in their first innings. Dimuth Karunaratne and Dinesh Chandimal scored half-centuries to take Sri Lanka close to 300. They were not able to get a big hundred, which eventually gave New Zealand a lead of 137 runs. Tim Southee and Neil Wagner picked up three wickets apiece. Trent Boult and Mitchell Santner chipped in with a couple of wickets each. Live Cricket Updates: New Zealand vs Sri Lanka 2015-16, 2nd Test, Day 1 at Hamilton

New Zealand had earlier announced that they will play the same playing XI that took field in the Dunedin Test. There were chances of them playing an extra spinner, but the pitch at Hamilton is a green top and they felt that having four pacers would be an asset. 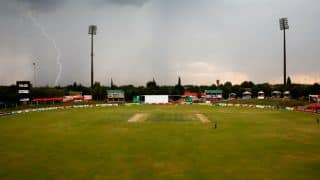