Catch the live streaming of first ODI of the five-match series between New Zealand vs Sri Lanka on SKY Sport.co.nz.

Sri Lanka were dealt with a major blow even before the first ball of the series was bowled, when Malinga was ruled out of the first two ODIs of the series, not having recovered from the knee injury that he sustained during the home series against West Indies during October and November. Nuwan Pradeep, Nuwan Kulasekara, Dushmantha Chameera and Suranga Lakmal. Chameera shone with the ball in the second Test, taking nine wickets for 115 runs, will be expected to excel in the one-dayers as well. New Zealand and Sri Lanka are set to take on each other following the conclusion of the Test series when they collide in the first game of the five-match One-Day International (ODI) series at Christchurch.

The hosts, who are in great form at the moment, will be without the services of the new-ball pair of Trent Boult and Tim Southee for the first two games, with Boult being rested for the series while Southee is set to return in the third one-dayer. Uncapped player Henry Nicholls has been named in the Black Caps squad for the ODI series

Live streaming is an important tool for any sporting fan in today’s fast moving online world. The concept which is used by millions in the world has become a global concept and has taken the world in its grasp. Through live streaming, one can watch any match from any part of the world. The ability and concept is a giant leap in the history of mankind. Viewing a live match on any online gadget such as mobile, tablet, laptop, etc, had became so easy now a days. The broadcasters too have started their official streaming service. However, the viewers should avoid using illegal and fake websites as they could be malware affected and could harm their gadget instead. 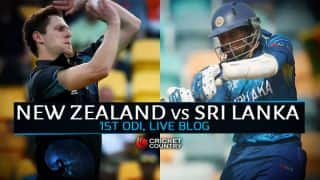