As it stands now, New Zealand look primed for a big win. Sri Lanka will have to dig in really deep to try and save the match whenever Brendon McCullum decides to declare on Day 4 as seems the likely scenario. After all the fight Sri Lanka showed with the bat on Day 2 of the first Test against New Zealand at Dunedin.Sri Lanka’s innings was wrapped up for 294 and they would have been dissatisfied with their effort as they conceded a sizable first innings lead to the home side. Tom Latham and Martin Guptill looked in no rouble whatsoever even against the swinging ball. After Guptill got out Williamson was happy to knock the ball around for singles, while Latham continued to look for boundaries. The defensive field failed to control the run rate even as New Zealand’s lead continued to swell. Latham finished the day unbeaten at 72, while Williamson was unconquered two short of his fifty.Live Cricket Scorecard: New Zealand vs Sri Lanka 2015-16, 1st Test at Dunedin

Catch the live streaming of Day Four of the first Test between New Zealand vs Sri Lanka on SKY Sport.co.nz 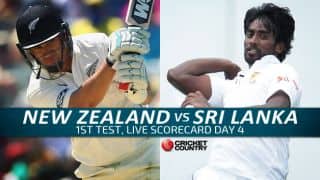