If Sri Lanka lose this match they will be dethroned from their No. 1 position in T20Is.

New Zealand take on Sri Lanka in the second T20 International (T20I) at Eden Park, Auckland. New Zealand won a close game by three runs in the first match at Mount Maunganui. Sri Lanka will be looking to bounce back from their heart-breaking win in the first match and level the series. This will be a crucial match for the visitors as a loss will dethrone from the No. 1 position in the ICC rankings, which they held on to since the ICC World T20 2012, New Zealand on the other hand, having dominated their opponents throughout the tour, will want to sign off o a high. Full Scorecard: New Zealand vs Sri Lanka 2015-16, 2nd T20I at Auckland

New Zealand openers Martin Guptill and his new opening partner Kane Williamson started going right from ball one and continued their relentless attack throughout their innings. However, Sri Lanka managed to pull things back a notch with Nuwan Kulasekara notching up a couple of wickets and Jeffrey Vandersay chipping in with one. Sri Lanka were of course assisted with the run out of Martin Guptill initially.

Sri Lanka will want to end the tour on a high after losing the Test and One-Day International (ODI series preceding the T20I series. New Zealand on the other hand will want to make the most of this game as this will be their final match before the ICC World T20 2016. Sri Lanka however will play a three-match T20I series against India. READ: New Zealand vs Sri Lanka 2015-16, 2nd T20I at Auckland, Preview

Catch the live streaming of the second T20I at Auckland between New Zealand vs Sri Lanka on SKYSport.co.nz.

Live streaming has become an integral part of every sports fan’s life as he will want to be connected with the sport that he loves from anywhere in the world. That’s what live streaming enables you to do. He can access live streaming from any part of the world. All he needs is t have a good internet connection. He can watch the matches on his mobile, laptop or even his tablet. One must however be careful as many links may not lead him to the accurate page. Hence the user too must use his judgement  to make sure that he has clicked at the correct link. 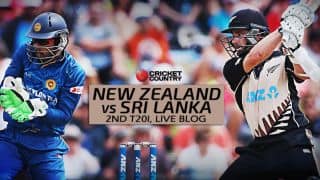