Catch the live streaming of Day Three of the second Test between New Zealand vs Sri Lanka on SKY Sport.co.nz.

Hosts New Zealand take on visitors Sri Lanka on Day 3 of the second of the three-match Test series at the Seddon Park in Hamilton on Sunday. New Zealand finished at 232 for 9 on Day Two of the second Test against Sri Lanka in the ongoing 2-match Test series. New Zealand still trail the visitors by 60 runs with one wicket to spare and three days left in the match. Doug Bracewell was unbeaten at stumps of Day Two with Neil Wagner getting dismissed on the very last ball of the day. It was a five-wicket haul for Dushmantha Chameera with Wagner becoming the fifth victim. Live Cricket Scorecard: New Zealand vs Sri Lanka 2015-16, 2nd Test at Hamilton

Live streaming is has become an integral part of any sporting fan in the modern world. The ability to stream live matches online at anywhere in any part of the world is indeed a big concept now and has taken the world in it’s grasp. It allows sporting fans to enjoy live action of their favourite sport online. This concept indeed is one of the biggest wins in terms of technology advancement. It’s so convinient that fans can enjoy the live action on their gadgets, such as mobiles, laptops, tablets, etc. Owing to it’s immense popularity, broadcasters have started their own streaming service. However, the viewers should avoild using illegal and fake websites as they could be malware affected and could harm their gadget instead. 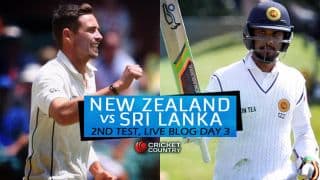