New Zealand will attempt to seal the series with a win in the third ODI.

New Zealand will take on Sri Lanka in the third One-Day International (ODI) at Saxton Oval in Nelson with view to claim the series. The hosts have won both the games so far. Not only have they won the game but broken Sri Lanka’s confidence to almost nothing by giving them cruelly lopsided results in both encounters. The Black Caps won the first game by seven wickets chasing a score of over 180 at a run rate of over nine. They bettered themselves in the second game chasing 118 at a run rate of over 14. LIVE CRICKET SCORECARD: New Zealand vs Sri Lanka 2015-16, 3rd ODI at Nelson

Catch the live streaming of the third ODI of five-match series between New Zealand vs Sri Lanka on SKYSport.co.nz.

Live Streaming is a concept that has taken the world off its feet in recent years. The advent of this technology has coincided with heavier workloads for the public which see them away on travel very often which makes constant access to television an uncertainty. However, with a portable gadget like a cell phone, tablet or laptop and internet they can access coverage of sporting events. One must maintain caution when visiting live streaming sites as some sites which claim to provide the service are malicious in nature. 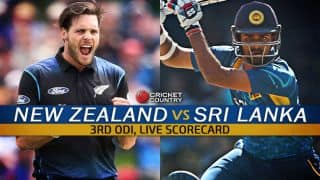