Guptill, who had been sidelined by injury in recent months, blasted 138 off 139 deliveries after captain Kane Williamson won the toss and opted to bat.

Tauranga: New Zealand won the opening one-day international against Sri Lanka by 45 runs in Tauranga on Thursday. New Zealand, electing to bat first, made 371 for seven with Martin Guptill making 138, Kane Williamson 76 and James Neesham a whirlwind 47 not out off just 13 deliveries.

Sri Lanka were all out with one over remaining for 326. Kusal Perera top-scored with 102 while Neesham took three for 38.

Guptill, who had been sidelined by injury in recent months, blasted 138 off 139 deliveries after captain Kane Williamson won the toss and opted to bat.

There were 14 sixes in the New Zealand innings, six of them from Neesham and five from Guptill, who also smacked 11 fours in the course of his 14th ODI century.

Guptill became the ninth fastest batsman to reach 6,000 ODI runs during his innnings, achieving the milestone in his 160th match at an average of 43.67.

Williamson was also in sight of a century until he miscued an attempted late cut and chopped a short Nuwan Pradeep delivery on to his stumps and was out for 76 while Ross Taylor made 54.

Neesham took 33 off the penultimate over when he smacked Perera for five sixes, a single and a two with the two coming off one of five no balls from full tosses above waist height.

ALSO READ: James Neesham hammers most runs in an over by New Zealand player

Lasith Malinga, who finished with two for 78, fired three full tosses above waist height but escaped censure while Pradeep received an official warning after firing one high full-toss at Taylor.

The second match in the three-match series is in Tauranga on Saturday. 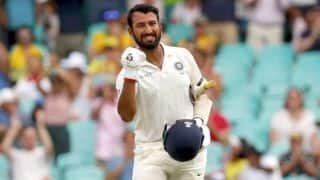