Having arrived at Basin Reserve with a Test best of 3/24, Southee got his name on the honours board.

After 10 Tests at Basin Reserve without a five-wicket haul, fast bowler Tim Southee got his name on the iconic New Zealand venue’s honours board on Saturday when he claimed 5/67 off 25 overs. His excellent bowling effort gave the home team the advantage over Sri Lanka, who at the end of day one of the first Test were 275/9.

Having taken three wickets in the morning session with swing and seam, Southee used the short ball post lunch to claim his first five-for in Wellington. He took a cue from left-armer Neil Wagner who dismissed the well-set Dimuth Karunaratne for 79 with a bouncer barrage, and used the short stuff to dismiss Angelo Mathews (83) and Dinesh Chandimal (6) to get to five wickets.

“It was a dull period where they got a good partnership when they needed it [133 between Karunaratne and Mathews]. We needed to try something and it worked,” Southee told reporters after stumps. “I don’t think I could do it for 10 overs like he [Wagner] does. He’s phenomenal at it. It takes a lot of effort and energy and the way he’s done it for a long time is, some would say mad, but that’s just Waggy. He’ll do anything for the side.”

Having arrived at Basin Reserve with a Test best of 3/24 five years ago, Southee recorded five wickets at the boutique venue.

“Good question. I honestly don’t know. I’ve bowled well here at times and other times I haven’t bowled so well. It’s nice to get some wickets here,” he said. “You have certain grounds around the world where you turn up and have done well in the past. Here, it’s always a nice place to play and nice to now finally have had some reasonable success.”

ALSO READ: Southee and Co. licking their lips ahead of Wellington Test

Niroshan Dickwella has batted Sri Lanka into the second day with an unbeaten 73, which Southee termed as “frustrating”.

“Mathews and Karunaratne played nicely after losing three early and our batsmen will take out of it if you can get in it can look reasonably easy. The way [Niroshan] Dickwella played, he’s been aggressive and played a gem of an innings so far for them. A frustrating one for us,” he said. “If we can get that last wicket as soon as possible, hopefully our batters can get stuck in.” 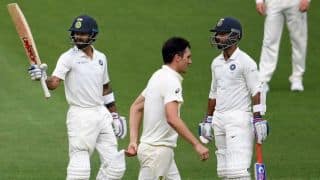