An unbeaten 117-run stand by Jeet Raval and Tom Latham tightened  New Zealand‘s domination of the second Test in Christchurch against Sri Lanka on Thursday as they backed up  Trent Boult‘s sublime six-wicket haul.

With Raval on 72 and Latham on 40, New Zealand were 191 runs ahead at tea on day two of the Christchurch Test with all second innings wickets intact.

It saw Sri Lanka bowling again 74 runs in arrears and Raval and Latham have steadily increased the lead, batting from lunch through to tea in the first wicketless session of the Test. Raval, in his 16th Test, was closing in on his career-best 88 set last year against South Africa while Latham was looking for his 15th half century. The pair put on 36 in just over an hour before lunch then comfortably accrued runs when play resumed, but not without anxious moments.

Raval brought up his seventh half-century with an outside edge off Dushmantha Chameera that went wide of gully to the boundary. Latham, on 32, top-edged Suranga Lakmal to fine leg where the ball slipped through the fingers of a diving Chameera.

Sri Lanka’s first innings was over quickly in the morning when they resumed with six wickets in hand and lost them in Boult’s blitz. He had Roshen Silva (21) caught at third slip by Tim Southee who also produced a spectacular one-handed catch to assist with the removal of Niroshan Dickwella (four). Dilruwan Perera, Suranga Lakmal, Dushmantha Chameera and Lahiru Kumara were all baffled by Boult’s late swing and went leg before wicket without scoring.

The pitch has continued to offer assistance to the bowlers but Lakmal and Lahiru Kumara have not been able to generate the same movement as Boult. 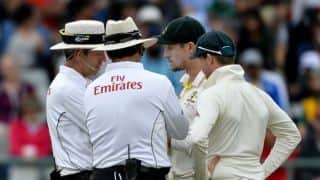