Sri Lanka enter the series against New Zealand on the back on a 3-0 series whitewash against England at home.

Sri Lanka set foot on New Zealand soil ahead of the two-Test series which begins on Saturday at Basin Reserve, Wellington on the back on a 3-0 series whitewash against England at home. The Islanders have also had to cope with off-field chaos with a lot of rejigs to their coaching staff.

However, on the eve of the opening Test, Sri Lanka captain Dinesh Chandimal feels the tourists will have to put everything behind and will need his seamers to attack the opposition batsmen.

“On the tour to the West Indies we got a lot of grass on the pitches and we always want to attack the batsmen, that s what we did as a bowling unit,” Chandimal was quoted as saying by ESPNCricinfo on Friday.

“The seamers have played some outstanding cricket. Now, they’ve got some experience playing on the grassy wickets, and I’m sure they will learn. What they did in West Indies they will do here.”

Sri Lanka are likely to go ahead with two of Lahiru Kumara, Kasun Rajitha and Dushmantha Chameera, but the pace attack will lack that venom. The last time Kumara and Rajitha played together, they took 12 wickets between them and put Sri Lanka on the road to victory against West Indies at Barbados.

Chandimal could also be tempted to field all three of their young quicks, but might go for the safe option and opt for the experienced Suranga Lakmal, who brings in that stability. “Definitely the seamers will be the happiest in both sides after seeing the pitch,” Chandimal said.

“We’ve got Suranga and in the last couple of years he’s done so much for the Test side. We’ve also got Nuwan Pradeep, who’s got a lot of experience playing international cricket. With the young fast bowlers also there, they’ve got really good pace and bounce. I’m sure they will enjoy playing in New Zealand.”

In their batting department, Sri Lanka will rely heavily on Dimuth Karunaratne, Angelo Mathews and Chandimal himself. Karunaratne, the only batsman to have made a century in the country, averages 53.91 in the year.

“At the same time Angelo Mathews and Lahiru Thirimanne are back in the side. We’ve got a few experienced players and at the same time, a few youngsters. Now they’ve almost played 20 Tests, so they’ve got experience as well. Everyone’s in good shape.” 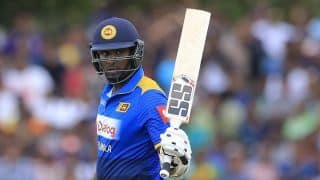