In both ODIs, New Zealand put up in excess of 300 with Jimmy Neesham having an impact.

New Zealand batsman Ross Taylor believes that in going up 2-0 over Sri Lanka in the three-match ODI series, the home team has set the marker for the 2019 ICC Cricket World Cup in England.

In both ODIs at Mount Maunganui s Bay Oval, New Zealand put up in excess of 300 with the top order getting runs and the lower order swinging the bat to devastating effect, underlined by the returning Jimmy Neesham s six-hitting prowess.

They escaped a stunning assault by Thisara Perera to win by 21 runs, and Taylor felt the template of going big at the death was what could be replicated at the World Cup in England.

“Both times we’ve set a platform and we’ve been able to use what has been our strength in the past – the big hitters have been able to come in and put the icing on the cake,” Taylor told reporters after the series win. “Players have got to play their natural game but at the end of the day you get yourself in trouble in ODI cricket when you’re four or five down at the 25-30 over mark, then you’re playing catch-up and you don’t give yourself a chance to express yourself.

“You’ve got to earn the right to do that and I think we’ve done so in the last two games. It’ll probably a high-scoring game again in Nelson. Those England grounds are generally high-scoring too so it’s quite good practice for the World Cup.”

With scores of 54 and 90, Taylor has managed fifties in his last 10 ODI appearances.

“It’s just trying to make a contribution and try and sum up the situation as best as possible,” he said. Two totally different innings [at Bay Oval] – coming into bat at two totally different times, so I guess that’s a pleasing thing. You’re still learning in this game and can get better in different situations.”

After the third ODI against Sri Lanka in Nelson on Tuesday, the Blackcaps face India for five ODIs and then three versus Bangladesh. The countdown to the World Cup has begun, said Taylor.

“First and foremost it’s the game in front of you, he said. “But personally I’ve been working hard on my game knowing it is World Cup year and a big focus on that. There’s still a lot of cricket to be played before that and it’s a long tournament – guys are going to IPL, warm-up games beforehand.

“As we’ve seen even in the last two games, we know our home conditions well and play very well at home. In England, there are similar conditions but there’s intricate differences in those UK venues. I think the guys who have played county cricket, their experience will come to the fore.” 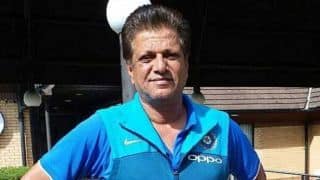