In his 63rd Test match, fast bowler Southee moved past Martin s mark of 233 with the wicket of Dinesh Chandimal on day one of the Boxing Day Test against Sri Lanka in Christchurch to occupy third place on New Zealand s all-time list.

Southee, having earlier cracked 68 off 65 balls to help New Zealand from 64/6 to 172/7 before he was dismissed courtesy a stunning catch from Dhanushka Gunathilika at short midwicket, grabbed the first three Sri Lanka wickets to fall after tea at Hagley Oval. His first scalp was Dimuth Karunaratne, edging a drive to Kane Williamson at gully, followed by Chandimal who feathered a catch to BJ Watling. Then Gunathilika top-edged a pull to deep square leg.

This took him to 235 career Test wickets.

Southee was drafted into New Zealand s Test squad soon after impressing for the Under-19s at the 2008 junior World Cup, and on debut against England at Napier he began with 5/55 in the touring team s first innings and backed that up by smashing 77 from 40 balls, with nine sixes, in New Zealand s second innings.

Southee s pace and swing have made him an integral part of New Zealand s bowling. With Trent Boult, the left-arm quick, he helped New Zealand reach the heights of No 2 in the ICC Test rankings when Brendon McCullum was captain from 2013-2016. In Test matches played alongside Boult – who sits close on his heels with 224 wickets – Southee and his new-ball partner have claimed a collective 477 wickets in 47 Tests. 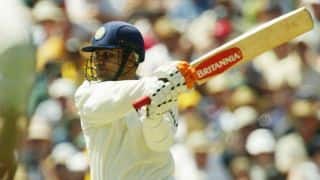