Sri Lanka are 30 for the loss of two wickets after five overs.

In the ICC World T20 2014 Group 1 game played between New Zealand and Sri Lanka at Chittagong, New Zealand won toss and elected to field. With dew conditions likely coming into play, it wasn’t a major surprise that they took the decision. Sri Lanka are missing out on services of skipper, Dinesh Chandimal due to one match suspension with Lasith Malinga taking over the mantle of captaining the Sri Lankan setup for the first time and that too in his 250th international game.

Sri Lanka started their innings with the dangerous Kusal Perera and Tillakaratne Dilshan opening the batting. It was Perera who opened up his shoulders first by neatly playing a flick shot with needlepoint precision to bisect the gap, as the ball raced to the boundary boards. He followed it up with a Jayasuriyaesque six over the mid-wicket region. On expected lines, Kyle Mills swung the ball a wee bit in the air away from the left-hander and into the right-hander in his first over, but wasn’t effective enough in difficult conditions.

The wet ball didn’t help the left-arm swing bowler, Trent Boult either during the first over he bowled. He bowled a beamer in his first over too. New Zealand though, got a bit lucky with Perera being strangled down the leg-side of the bowling off Boult. On the other end of the spectrum, Dilshan continued on his merry way with a Dilscoop off Mills, before he lost his wicket to Boult, while trying to play the scoop shot. Once Boult settled into his rhythm he got it to swing it late. 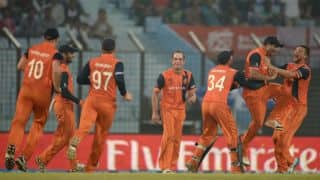