Twice in the innings Wagner took two wickets in successive balls in his seven-wicket haul.

Wellington: New Zealand‘s Neil Wagner took a career-best seven-wicket haul to orchestrate a stunning collapse as West Indies slumped to 134 all out on day one of the first Test in Wellington on Friday. New Zealand were nine without loss at tea in reply to the West Indies’ first innings 134. Tom Latham was not out six with Jeet Raval on three.

Twice in the innings Wagner took two wickets in successive balls, and the renowned short-ball specialist showed there was more in his armoury when he bowled West Indies captain Jason Holder with a genuine yorker.

His figures of seven for 39 off 14.4 overs eclipsed his previous best six for 41 against Zimbabwe last year as he brought the West Indies’ first innings to an end midway through the second session of play.

The West Indies went into the Test riding a wave of confidence after a series win over Zimbabwe and taking a Test off England in recent months.

Even after losing the toss and being sent in to bat on a green wicket, openers Kieran Powell and Kraigg Brathwaite looked solid against the New Zealand quicks.

The pitch was green but with cloudless skies and little wind there was no seam or swing movement for Trent Boult and Matt Henry.

It allowed Powell and Brathwaite to see off the new ball and steer the score to 59 without loss when the innings turned dramatically in Wagner’s third over.

A menacing delivery targeting Brathwaite’s rib cage was fended straight to Henry Nicholls at short leg and the opener was gone for 24.

Boult came back for his second spell and removed Powell, the tourists’ top scorer with 42, before Wagner hit a purple patch as he ripped through the West Indies’ new generation of specialist batsmen in the space of four balls.

Shimron Hetmyer went for 13 in the last ball before lunch, Shai Hope went on Wagner’s second ball after play resumed and debutant Sunil Ambris stepped back on his stumps with the first ball he faced in Test cricket.

Hope, the hero of the West Indies triumph over England with a century in each innings at Headingley in August, provided the first Test dismissal for Tom Blundell, on debut for New Zealand, when he feathered a short ball to the wicketkeeper.

The West Indies had slumped to 80 for five and their hopes that Roston Chase and Shane Dowrich could lead a revival were short-lived.

The pair added 17 before Wagner was back in the action again with rising delivery to Chase (five) that was steered to Jeet Raval at leg slip.

With Wagner’s first five wickets all from short deliveries, new batsman Holder stood tall for the first ball he faced, only for Wagner to switch to a yorker which bowled him, and 59 without loss had become 97 for seven.

Dowrich was run out at the non-strikers end for 18 and Boult bowled Miguel Cummins for one.

Kemar Roach (not out 14) put on 29 for the last wicket with Shannon Gabriel (10) before Wagner had Gabriel caught in slips to wrap up the innings. 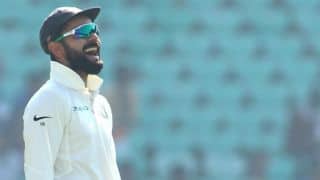 Virat Kohli: I am a typical Delhi boy at heart