New Zealand in fact are the only other side to have won a World Cup apart from Australia and England.

Australia and England, the Ashes rivals, start favourites in the ICC Women’s World Cup 2017, but the Suzie Bates-led New Zealand side are right up there as well. New Zealand in fact are the only other side to have won a World Cup apart from the above two. New Zealand begin their journey against a Sri Lankan side that is keen to shed off the underdog tag. The match will be played at Bristol and will be available on Hotstar and also on Fox Sports.

Viewers in New Zealand can watch streaming on fanpass.co.nz, while Sri Lankan fans follow their team either on Hotstar or channeleye.lk. CricketCountry will be running a live blog and produce reports for the same. Apart from the updates commentary, the blog will also provide you with updates from the social media space.

New Zealand are overwhelming favourites and are ranked at No.3 while Inoka Ranweera s Sri Lanka is reeling at No.9. New Zealand have a 17:7 win-loss ratio in the 2016-17 season, and in contrast Sri Lanka won 6 and lost 9 during the same time frame. With 9 of Sri Lanka s 15 members having played the previous edition in 2013, experience to produce an upset is there in the Lankan camp.

Also, Sri Lanka have left-handers at galore something that New Zealand aren t used to, something that the White Ferns coach Haiee Tiffen also admitted. 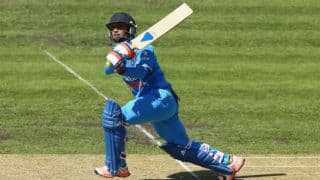