In January this year, Munro smashed a 14-ball 50 against Sri Lanka and the innings comprised one four and seven sixes, helping his side rout the island nation in the second T20 of that series in Auckland.

Mumbai, Mar 8 (PTI) New Zealand’s hard-hitting batsman Colin Munro, who hit an astonishing 23 sixes in his knock of 281 for Auckland against Central Districts in the Plunket Shield last year, described the day as one off when everything clicked. Recalling his knock in Napier, Munro said, “23 sixes…ya that’s one of those (days) where everything clicked I suppose, and you look back on those sorts of days and you think that well how did I do that. If I go back on that day and write a little book, will be great so that I can do that every time I am batting so.”

During that swashbuckling innings, the South-African born player, who looks up to Jacques Kallis and West Indies great Brian Lara, faced 167 deliveries. “I think it was one of those days.. it just clicked and (I) was happy to hit a few out in the middle,” the 28-year-old player said.

In January this year, Munro smashed a 14-ball 50 against Sri Lanka and the innings comprised one four and seven sixes, helping his side rout the island nation in the second T20 of that series in Auckland.

Earlier, Munro hit the second fastest half-century in Twenty20 International (T20I) during the second T20I of the two-match series against Sri Lanka on Sunday. Munro’s 50 off just 14 balls came just 20 minutes after Martin Guptill hit New Zealand’s fastest fifty when the latter reached the milestone in 19 balls. Now Munro holds the record for New Zealand’s fastest half-century and the duo helped the hosts beat Sri Lanka in the second match and thereby white-washing them 2-0 in the T20I series. Sri Lanka’s embarrassing tour came to an end with losing both One-Day International (ODI) and T20I series. 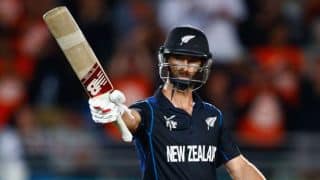 ICC T20 World Cup 2016: India will have to deal with expectation of fans, says Grant Elliott