For CSK, the key is to keep picking wickets, as they don't have a big score.

In attempt to defend 148, Chennai Super Kings (CSK) were always going to need an early wicket and they have got an early wicket in the form of Nic Maddinson. He managed to score just four runs off seven ball, failing to make too much of an impression in his first outing for RCB in Indian Premier League (IPL) 2015. Live Updates: Chennai Super Kings vs Royal Challengers Bangalore, Match 37 at Chennai

The wicket will put RCB under pressure and they’ll have to forge a partnership. For CSK, the key is to keep picking wickets as the score their defending isn’t very challenging otherwise. Live Cricket Scorecard: Chennai Super Kings vs Royal Challengers Bangalore, Match 37 at Chennai

Earlier CSK crawled and clawed their way to an average total of 148 for nine. Mitchell Starc and Harshal Patel starred with the ball for RCB picking three wickets and two wickets respectively. Suresh Raina top scored for RCB with 52, while skipper MS Dhoni gave a late burst scoring 29 off 20 balls. 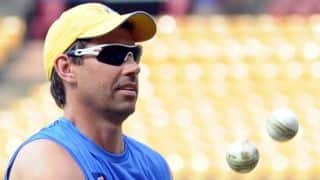