Bangladesh entered the final of the series by two wickets in the penultimate over against Sri Lanka.

Match 6 of Nidahas Trophy 2018 saw everything: drama, verbal spat and also vandalising the property of R. Premadasa Stadium in Colombo. Bangladesh who entered the final of the series by two wickets in the penultimate over against Sri Lanka, have reportedly broken a glass of their dressing room while celebrating the win. The ground staffs have been asked to check the CCTV footage to understand who caused the damage. However, after Bangladesh s shameful act on field, match referee Chris Broad could come hard on some of the players.

The ground staff did notice the broken glass and informed the Sri Lanka Board immediately. The Board asked the officials to check the main man and have asked them to submit a report by Saturday noon, as reported on cricbuzz.

On the other hand, the umpires as well also closely check the footages of the on field fiasco before deciding whether to hand any charges against any player.

Bangladesh set date with India for the final of the series which will be held on Sunday at the same venue in Colombo. 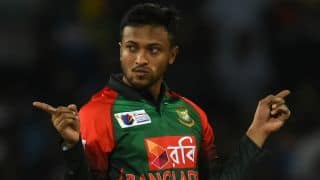