Rohit Sharma‘s torrid time from South Africa continued. He fell for a 4-ball duck against Sri Lanka in the first T20I of the Nidahas Trophy 2018. Rohit trying to go over mid-on was out courtesy a brilliant catch by Jeevan Mendis. Rohit now joins Dilshan Tillakaratne to score a 100 and a duck in T20Is. This was also his 5th duck. Rohit is also the 45th captain and 2nd Indian captain to score a T20I duck. Sadly for India, Suresh Raina failed with the bat. Raina was bowled by Nuwan Pradeep for one. Earlier, India handed Vijay Shankar his debut cap as Sri Lanka won the toss and put the visitors to bat. Shankar with this became India’s 74th T20I player. 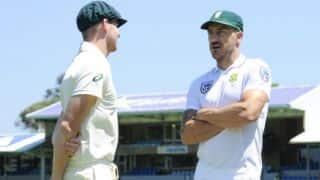