Rana's two scalps in the 15th over on Sunday proved vital for KKR as RCB set them a target of 177.

Kolkata: Kolkata Knight riders (KKR) part-time off-spinner Nitish Rana turned heads with his two wickets in successive deliveries to get rid of Royal Challengers Bangalore (RCB) star batsmen AB de Villiers and skipper Virat Kohli in their Indian Premier League (IPL) opener. His two scalps in the 15th over on Sunday proved vital for KKR as RCB set them a target of 177 which Sunil Narine, with his 19-ball 50, made light of and later skipper Dinesh Karthik (35 not out) ensured they register a comfortable four-wicket win with seven balls to spare.

But in the 15th over when Rana was asked to bowl, De Villiers was in full tilt and with Kohli playing second fiddle at the other end, RCB looked set for a big total after being asked to bat first at the Eden Gardens. Rana was tonked for a six by the marquee South African batsman on the first ball before he got his and Kohli’s back in the next two deliveries.

“I had nothing to lose, but everything to gain. I saw the ball was gripping well, if I bowled in right areas I might get wickets. I backed myself and luckily I got the two big wickets. It was very important to get those batsmen out at that stage,” Rana told reporters at the post match press conference.

“I bowl at domestic level for Delhi. I bowled well in the practice matches and did well and then Dinesh bhai told me to get ready, you could bowl one or two overs in any match. Luckily got a chance and proved myself,” Rana added when asked about his lesser known bowling skills. With the bat, Rana scored a vital 25-ball 34 coming in at No.4 to help the hosts register a four-wicket win.”

“My job is to score runs. I don’t see that as pressure. It’s good that people are expecting more from me having done well last season. I love to bat under pressure, you are aware of the situations around you,” Rana signed off. 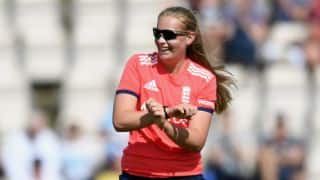