Yuvraj Singh has no clue what is the reason behind Pune Warriors' unending misery in the Indian Premier League as they suffered seventh consecutive defeat and their play-off hopes are almost over. 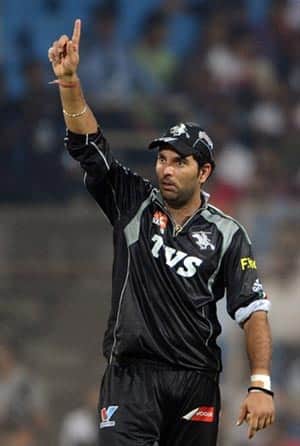 Yuvraj Singh has no clue what is the reason behind Pune Warriors’ unending misery in the Indian Premier League as they suffered seventh consecutive defeat and their play-off hopes are almost over.

Pune lost by 21 runs to Mumbai Indians and continue to be at the bottom of the points table.The only satisfaction for Yuvraj from tonight’s game was that he dismissed in-form Mumbai skipper Sachin Tendulkar and the outstanding performance of leg-spinner Rahul Sharma, who gave away just seven runs in four overs and two wickets.

“I got Sachin out. That was great but unfortunately lost the game. I really don’t know what’s happening. I think we bowled decent enough. May be 10 runs extra but 160 was gettable,” Yuvraj said after the match.

“We played too many dot balls. You need power hitters in the end to finish the game. Unfortunately we got too bogged down. We have nothing to lose now; so I am sure we will cut somebody (some team) out,” Yuvraj added.

Mumbai have returned to the top of the points table but for skipper Tendulkar is job is not yet complete.

“Ya, knocking at the door but the door hasn’t opened yet.We would love to get in,” he said when asked about their almost certain place in the play-offs.

Tendulkar said there was still room for improvement in his side and also praised Rahul, who was adjudged man of the match for his brilliant bowling.

“We could always do better. I thought Rahul Sharma bowled brilliantly. He has bowled a few good spells and this was one of them. Suman and Pollard batted well. If we go too hard, we can get out for 95 also. We have to decide based on the track,” he said.

Tendulkar was satisfied that his move to promote Suman up the order, yielded desired result.Suman played a fiery 16-ball 36 to lead the team’s recovery after a not so good start.”Suman batted really well. It wasn’t wild slogging; it was clean hitting. I am happy that I took the decision to promote him ahead of Pollard and Symonds. We should continue to play like this, the rest will follow,” Tendulkar said.

Man-of-the-Match Rahul is eyeing a berth in the national cricket team after putting up yet another good performance.

“I vary my pace and bounce I extract is my key because of my height. The figures look good. it’s difficult to give seven runs in a over leave alone in four (overs).

“I am happy. I have to continue to work hard – I have done well in the domestic cricket- and I want to turn out for India. God willing and with blessing of my parents and well-wishers I will get there,” the tall leg-spinner, who plays for Punjab Ranji team, said.