Ganguly spoke on a range of topics including how he intends to operate as the BCCI head, Virat Kohli's priorities and more.

Sourav Ganguly, the newly elected president of the BCCI, addressing his first media conference since taking over, said his target will be to guide Indian cricket corruption-free.

Ganguly, drawing parallels between his appointment as BCCI president and when he was given captaincy of the Indian cricket team back in the year 2000 – when the nation was hit by a match-fixing scandal – stressed on the need to ensure corruption-free performance of the cricket board.

“It is an honour to have been asked to take over, when it is a new start for the BCCI. It’s a new start, a similar situation to when I took over India’s captaincy,” Ganguly said.

Ganguly was unanimously elected on Wednesday as president of India’s troubled cricket board, the sport’s most powerful body. The only nominee to the post, Ganguly was appointed at a meeting in Mumbai, the board confirmed on Twitter.

The 47-year-old’s appointment ends more than two years of a Supreme Court appointed committee overseeing the board’s affairs. Ex-chief Anurag Thakur and his number two Ajay Shirke were axed by the top court in January 2017 over their failure to enact a series of recommended reforms.

The order came after judges slapped restrictions on the BCCI’s accounts in 2016 over its failure to implement changes put forward by a panel headed by a former top judge, Rajendra Mal Lodha. The court since appointed a top anti-corruption troubleshooter, Vinod Rai, as head of a team to oversee the running of board. 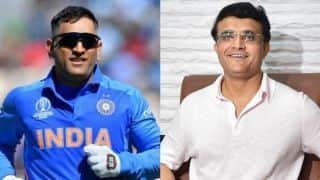