Pakistan's bowling coach Mohammed Akram has said Ajmal withdrew as he did not feel "effective enough".

Rejecting suggestions of an Indian conspiracy in Saeed Ajmal‘s pullout from next year’s ICC World Cup 2015, Pakistan’s bowling coach Mohammed Akram has said the off-spinner withdrew as he did not feel “effective enough” after reworking his suspect bowling action.

Akram strongly refuted assertions that India was behind the crackdown against bowlers with illegal actions to target Ajmal and Mohammad Hafeez. “First of all I don’t think anyone is involved. Until the ICC allowed it Saeed and others kept on playing without problems. Now with new protocol in place things have changed,” Akram told Ary News channel.

Akram, who is one of the experts working on correcting Ajmal’s bowling action, also made it clear that the decision to pull out of the World Cup was taken by the suspended off-spinner himself. “It was purely a decision by Saeed who felt his bowling after modification was still not effective enough for international cricket,” Akram, who is also the head coach of Pakistan’s National Cricket Academy, said.

The PCB announced yesterday that Saeed would continue remedial work on his bowling action and would not be sent for further biomechanic tests to Chennai until he is confident himself about his action.

“Saeed is a champion bowler and thinks like a champion. He himself wants to work further on his bowling so that he is as effective as before. He is facing issues with the elbow extension while bowling the Doosra delivery. But even otherwise he has developed a carrom ball and also seam up delivery to improve his effectiveness,” Akram said.

The academy’s head coach said that Ajmal himself will now decide when to take the ICC test. “Life does not end with the World Cup and there is lot of cricket after the tournament and Saeed also realises this and is accordingly working more on his modified action,” Akram said.

Akram was also asked about the reasons for not sending Ajmal for the informal bowling test in Chennai. “There were issues there first of all the visas came late and secondly now even Saeed wants to first improve his effectiveness before taking any tests,” Akram said. 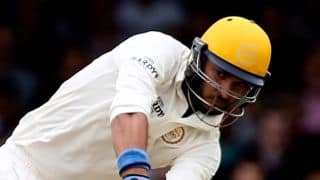