RCB are on the third place of the points table of IPL 2016 with 14 points and one match to go.

Shane Watson, very impressed with Royal Challengers Bangalore (RCB) skipper Virat Kohli heaped praises as he said no one can ever bat like Kohli. Watson’s comments came after the in-form monstrous Kohli smashed a record fourth century in a single Indian Premier League (IPL) season. His fourth ton came against Kings XI Punjab at Bengaluru in the ongoing ninth edition of IPL. “To be able to score one [century] in your entire career [in T20s] is an incredible feat, but for someone to score four hundreds in a [single edition] of the IPL!,” Watson, who has been a crucial member of Kohli’s RCB said. FULL CRICKET SCORECARD: Delhi Daredevils vs Royal Challengers, IPL 2016 Match 56 at Raipur

Kohli, who has been in unbelievable form, having scored 865 runs in 13 matches of IPL 2016, has been the hot topic of discussion. It is not wrong to assume that the viewership of this edition of IPL has been poor when compared to the earlier ones and Kohli’s fireworks are easily the only reason to turn a relatively boring edition into an interesting one.

According to CricBuzz, Watson added, “Virat and AB [De Villiers] as well, they’re playing a different game at the moment. Their control and what they’re doing is mind blowing. It’s a privilege to be able to play with RCB, to get to know Virat and AB, off the field as well and see what incredible people they are.”

Watson, who retired from international cricket at the end of ICC World T20 2016, revealed that whenever Australia faces India, the sides comes up with a special plan for the dangerous Kohli. “Every time I have played against Virat, there have always been specific plans, more on how to contain him. He rarely makes a mistake. As a bowler, I just want to contain him as much as I can,” the Australian said. READ: What Virat Kohli has done to drab IPL 2016 season

“It’s more about trying to mix it up so that he doesn’t really have much of an idea about where I am going to bowl at. But by the end of the third over or so he is reading me like a book and hits wherever he wants,” he added.

RCB are on the third place of the points table of IPL 2016 with 14 points and one match to go. RCB’s final match of the group stage is against Delhi Daredevils. 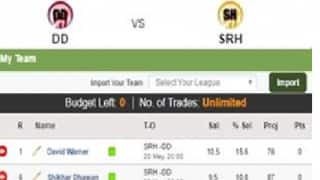