Pakistan clinched the three-match series against World XI 2-1 after winning the third and final T20 by 33 runs last night at Lahore.

Dubai: The ICC today ruled out an “overnight miraculous” return of international cricket to Pakistan even though it was satisfied with the successful staging of the Independence Cup in Lahore. “Returning full-time international cricket back to Pakistan is not going to be an overnight miracle. It has to take time. The PSL final was the first step, this is the second,” ICC Chief Executive David Richardson said in a video messages today.

Satisfied with the conduct of the tournament, Richardson said this will give a lot of confidence to big teams such as Australians and South Africans. “I am very satisfied. Back in 2009, the confidence in the security situation in Pakistan was obviously at an all-time low. And following on, over the past 12 to 24 months, the improvements made by the Pakistan security forces was a catalyst for moving from that phase of playing in neutral territories to try to make an effort to bring international cricket back to Pakistan,” he said.

“The main objective of that is to try to build confidence in the likes of the Australians, South Africans and other countries that the threat can be managed and this tour has shown — that is the case. The security arrangements were unprecedented, yes, they were severe, but above all, everybody realised that it is all very well to have a security plan on paper but can it be implemented? And that’s a question they answered in the affirmative,” Richardson added.

Pakistan clinched the three-match series against World XI 2-1 after winning the third and final T20 by 33 runs last night at Lahore.

ICC Director Giles Clarke, who attended the first two matches, said the World XI received extraordinary reception at Lahore and the event will a big step towards international cricket returning to Pakistan.

“The reaction of the Pakistanis who were at the ground is something I have never seen in my life. I think this courageous team, its management and all the people in Pakistan have demonstrated that it is possible for overseas players to come to Pakistan and show their skills,” he said.

“It has been a fantastic tournament. From my point of view, as Chairman of the ICC’s Pakistan Task Team, I am very pleased that we have accomplished this and I am sure the players will talk to their colleagues and we will see the return of bilateral international cricket to Pakistan.”

Richardson, who attended the second T20I, said the reason behind staging the Independence Cup was to show that it is possible to safely host a tournament in Pakistan.

“One of the main reasons for staging the tour was as a stepping stone to building the confidence that even though there may be some danger to staging sports events or visiting Pakistan, the Pakistan security agencies are more than capable of mitigating that threat,” he said. 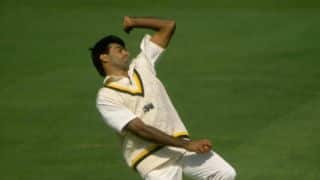