No reason to press the panic button: Kirsten

No reason to press the panic button: Kirsten

Former India coach Gary Kirsten is a bit surprised and sad after watching India's abject capitulation in England that led to the team surrendering the No 1 rank in Tests to Andrew Strauss's men. 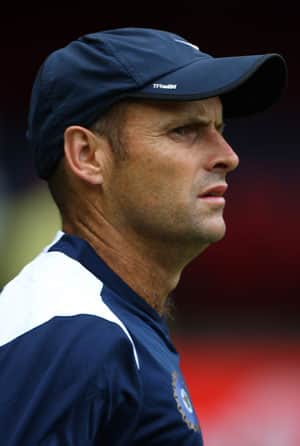 Gary Kirsten said he was sad and surprised over India’s surrender of the No. 1 Test tag to England Getty Images

Former India coach Gary Kirsten is a bit surprised and sad after watching India’s abject capitulation in England that led to the team surrendering the No 1 rank in Tests to Andrew Strauss’s men.

“I am bit surprised with the results, but not in a negative way,” the current South Africa coach said on the sidelines of a promotional event here. He insisted that there was no any reason to press the panic button.

“It’s always difficult to understand why teams ebb and flow and often it’s the intangibles that make the difference,” Kirsten told ESPNcricinfo.

Having relinquished the coach’s job after guiding India to World Cup victory, Kirsten admitted that it is always difficult to continue the stupendous run especially when a change of guard takes place.

“It’s not easy to continue a run of success. It’s difficult to reach the top and stay there. They won the World Cup, which was massive for them, but then they’ve had a tour of West Indies and a few injuries and maybe the hunger to win games goes down a little,” he explained.

The former Proteas opener felt that it will be a must for new coach Duncan Fletcher to get accustomed with the team culture.

“When a new coach comes in, it s important that he follows on with the culture of the team,” Kirsten said.

Asked about the deficiencies of this current side which is entering a transition phase, Kirsten said the team always knew that the bowling had limitations.

“They are a great cricket team, with a great captain and one of the best batting line-ups in the world which is why they were No. 1 but we always knew that we were bit short on the bowling side and that was something that we learnt to manage.”

Although veterans like Sachin Tendulkar, Rahul Dravid, VVS Laxman are in the home stretch of their illustrious careers, Kirsten felt that idea should be to continue with them till they enjoy the game.

“People said that with such an experienced team we should try to integrate youth but I felt that for as long as those experienced guys were there and they were enjoying it and playing good cricket, they should carry on,” he said.

He further added, “Even if it means that there is only one spot to bring in a youngster, that’s fine. We were able to, at No 6, so we covered both angles.”

Kirsten feels that all is not lost as India are still to play five ODIs where they can make a statement as reigning world champions.

“It’s in the shorter format of the game that Kirsten thinks India can redeem themselves on this tour, especially after their World Cup triumph. I hope they have a good ODI series, because if they do, they can look back and say, ‘ok, we had a disappointing Test series, but as World Cup winners we’ve shown our worth in the one-day game,” he added. (PTI)

Sacked Greg Chappell may walk away from Australian cricket