In his quest for a 4-0 whitewash, Australian skipper Michael Clarke said his team would not show any sympathy to Sachin Tendulkar, who remained unbeaten at the end of day two of the fourth Test and is desperately, seeking his 100th international century. 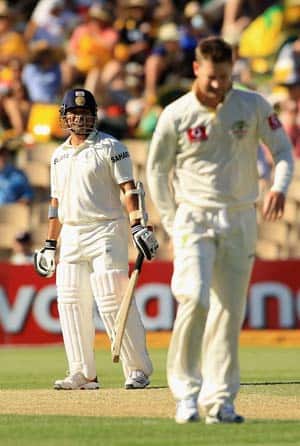 In his quest for a 4-0 whitewash, Australian skipper Michael Clarke said his team would not show any sympathy to Sachin Tendulkar, who remained unbeaten at the end of day two of the fourth Test and is desperately, seeking his 100th international century.

“No, I certainly won’t be showing him any sympathy. We’re there to win the game. He’s a wonderful player and it’s going to be really tough to get him out on that wicket. But somehow we’re going to have to find a way to do it twice,” said Clarke who slammed 210 during Australia’s mammoth total of 604 for 7 declared in their first innings.

Even though Tendulkar is still around, Virender Sehwag (18) and Rahul Dravid (1) didn’t help the team’s cause with their early dismissals on the second day.

“Sehwag is a very good player. His way to score is a lot different to mine. He has had a lot of success.

“As for Dravid getting out bowled again, I have no idea what he’s feeling. Importantly, we have plans for every batter. So far things have worked,” said Clarke.

On the timing of his declaration and whether he could force the issue against India in this Test, Clarke said, “It was probably more about the runs to be honest. Trying to get to 600 and we still had plenty of time left in the day, which was probably the most pleasing.

“To take those two crucial wickets on Wednesday is a really good start for us. But there’s still a lot of work to be done.”

Clarke, along with Sir Donald Bradman and Walter Hammond, has become the only the third captain in the history of cricket to score a triple and a double century in the same series.

“I didn’t know that but it’s very nice to have scored some more runs. The wicket’s very flat. Ricky and I spoke early in our innings, once we got in again on Wednesday, it was about going on and making big ones”, he said.

“The other side of that though is it is going to take a hell lot of work to take 20 wickets on that track,” Clarke said.

For the second time in this series, after putting on 288 together in Sydney, Clarke and Ponting have chipped in with a massive 386-run stand.

“It’s always nice to see us both scoring runs when we bat together. We’ve known each other for a long time, played a lot of cricket together. Both of us were disappointed with our series last summer. We’ve worked hard on our games to improve.

“We know each other’s games quite well so we can certainly communicate to what we’re seeing, if we feel like we can help. We speak a lot when we bat about what the other person has seen, to get help and advice and to keep both of us going and this innings was no different.

“It’s a tough game, it’s the toughest game in the world.

“For Ricky and me to have individual performances and team performance like this, it’s why you train so hard. It’s very satisfying. It’s about enjoying the good times and when you’re not doing so well it’s continue to work hard and have the confidence in your own ability that things are going to turn around for you.”

Clarke reiterated that the job for Australia was far from over and it wouldn’t be easy to conquer Indian batting on this track.

“Hopefully, we’ll see some deterioration, especially in the back half of day four and five. Tomorrow, it’s going to be pretty nice to bat on. A couple of balls stayed a little bit low. But it’s as good a batting wicket as you’re going to get.

IPL 2012 auction to be held in Bangalore on February 4