Sourav Ganguly says that there were "too many gentlemen" when he captained India, joking that's why his side struggled with mental battles.

Former skipper Sourav Ganguly says that there were “too many gentlemen” in the team when he captained India and joked that’s why his side struggled with mental battles against tough opponents such as Australia.

Speaking during India’s World Cup semifinal clash against New Zealand at the Old Trafford, Ganguly said: “It was very hard with that team, because we had too many gentlemen. If you ask Rahul Dravid to do that, he’ll come back and say ‘No no no that’s not the right way to play.’

“You ask VVS Laxman to do that, he’ll say ‘I’m concentrating on my batting.’ And if you tell Sachin (Tendulkar) to do it, he will stand at mid-on and tell the mid-wicket fielder to sledge Steve Waugh, and himself not do it,” Ganguly revealed with Laxman laughing alongside him.

The 47-year-old further said that only offspinner Harbhajan Singh was the one who followed his instructions. “There were a lot of issues in that team. The only ones holding the Indian flag were Harbhajan Singh and Sourav Ganguly. Sardarji did everything I told him to do,” he said.

Ganguly was the captain of the Indian team from 2000 to 2005, a period when India beat Australia in a Test series at home and drew a Test series in Australia.

On Tuesday, rain played a spoilsport as the semifinal clash was pushed to the reserve day with New Zealand 211/5 after 46.1 overs. 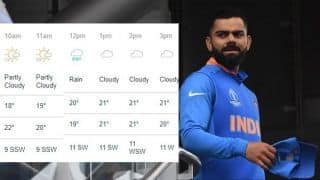