Spin icon Shane Warne has named his preferred Australia squad for the 2019 ICC Cricket World Cup and it does not feature the leading run-getter in ODIs this year.

Usman Khawaja was not named by Warne in his hypothetical Australia squad for this summer’s blockbuster event, despite tallying 769 runs at an average of 59.15 in 2019.

Warne, instead, has tipped Steve Smith and David Warner to be recalled for the World Cup now that their 12-month bans have ended. He also omitted Peter Handscomb and Josh Hazlewood, who has been on the mend from injury, from his World Cup squad, while naming D’Arcy Short as an opener.

Handscomb, since he was recalled to Australia’s ODI squad in January, has this year made 479 runs in 12 innings at 43.54, with one century and three fifties. Short last played an ODI in November 2018.

Hazlewood has recovered from a back injury that kept him out of action since January and recently admitted to being nervous about Australia’s selection for the World Cup.

Teams have until April 23 to submit their squads for the World Cup. Australia play their first game on June 1 against Afghanistan at Bristol. 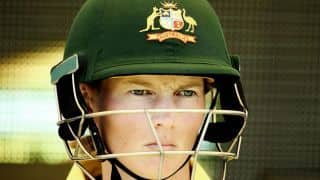