Former India captain Sunil Gavaskar says that India's inability to get rid of England tail-enders is an age old problem that surfaced in their very first Test in 1932.

In 1932, India made their Test debut against England at the Lord’s. After the hosts opted to bat, Indian reduced them to 166/6 through pace duo of Mohammed Nissar and Amar Singh and captain CK Nayudu. Wicketkeeper-batsman Les Ames led a lower-order resistance to score 65 before England were bowled out for 259 in their first innings.

Fast forward to 2018 and it was yet another English wicketkeeper-batsman, going by the name of Jos Buttler, whose gritty 89 guided England out of a hole in the ongoing fifth and final Test against India.

Former India captain Sunil Gavaskar drew parallel between the two matches, which took place 86 years apart saying India’s struggles against England order continues and they have made little progress on that front.

“Way back in 1932 when India played its first ever Test match, Mohammad Nissar and Amar Singh had rocked the England top order and taken 5 wickets without conceding too many runs,” Gavaskar wrote in his column for The Times of India on Sunday.

“It was then that the England lower-order, through a combination of grit, determination and some luck, held on and added valuable runs that took the game away from India. 86 years later, not much has changed as England s lower order batsmen once again thwarted India s bowlers and have given the English bowlers a good score to put pressure on the Indian batsmen.”

Buttler came in to bat when England were in a spot of bother at 172/5. From there, he took charge and recorded his third half-century of the series. Before becoming the last English wicket to fall on Day 2, Buttler had taken the total of 332.

Praising Buttler for his yet another rescue act, Gavaskar wrote, “As in the previous games, it was Jos Buttler who came to England s rescue and with his simple method of blocking the good ball and smashing the bad ones, kept England s score ticking. He was happy to take a single whenever it was available knowing every run is vital and also showed confidence in the lower-order batsmen.”

Even Broad, who hasn’t been the same batsman since copping a blow to his nose from a Varun Aaron bounces, gained confidence in Buttler’s presence scoring a vital 38 off 59 with three fours. “Stuart Broad flourished in his company and they added runs at a good clip to add to India s woes,” he said.

“That gave the hope that the tail would be wrapped up early in the morning what with the second new ball being only 3 overs old. But then it was back to 1932 again,” Gavaskar wrote. 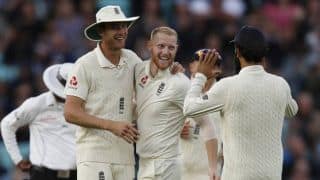