Hello and welcome to CricketCountry’s live cricket blog and updates of the third and final Twenty20 International (T20I) between New Zealand and Pakistan.

Hello and welcome to CricketCountry’s live cricket blog and updates of the third and final Twenty20 International (T20I) between New Zealand and Pakistan! The tourists won the toss and elected to field in the final game of this series, which will be followed by a three-match ODI series. The match will be played at the Westpac Stadium in Wellington, and it will be a series decider as the three-match series is currently levelled at 1-1. Pakistan surprised many by winning the first T20I at the Eden Park in Auckland on January 15, but New Zealand bounced back in style in the second as they handed the touring party a 10-wicket thrashing, in the second T20I at the Seddon Park in Hamilton. New Zealand will be favourites going into this clash. LIVE CRICKET SCORECARD: New Zealand vs Pakistan, 3rd T20I at Wellington

Live Cricket Score, Pakistan 101 in overs 16.1, lose by 95 runs: Anwar Ali goes after Milne, gets a boundary past backward-point, but falls immediately afterwards, edging one to Ronchi, nine-down! Aamer walks out and plays out the over. McClenaghan from the other end. Wahab gets a single, back to Aamer, who gives the strike back — and that is 100 for Pakistan! Milne finishes things off by having Wahab caught-behind (he tried to make room and go for the big heave), it’s all over! OUT! Anwar Ali c Luke Ronchi b Adam Milne 8(7)! Wahab Riaz c Luke Ronchi b Adam Milne 4(5)!

Live Cricket Score, Pakistan 93/8 in overs 14, Target 197, BATTING: Anwar Ali 4(5), Wahab Riaz 1(1): That is it, the big wicket! Sarfraz was going all-out, he hit two boundaries off Colin Munro, but went for the sweep off Elliott, and top-edged that. Easy catch at short fine-leg. OUT! Sarfraz Ahmed c Adam Milne b Grant Elliott 41(36)!

Live Cricket Score, Pakistan 77/7 in overs 12, Target 197, BATTING: Sarfraz Ahmed 30(29), Anwar Ali 3(3): It is as good as over for Pakistan after that double-blow from Grant Elliott. Shahid Afridi went after it, the ball went up vertically, and the substitute Matt Henry took it comfortably at long-on, typical Afridi dismissal (after he hit his customary six). Then Imad Wasim cut hard, but Martin Guptill pulled off a diving catch. OUT! Shahid Afridi c sub (Matt Henry) b Grant Elliott 8(8)! Imad Wasim c Martin Guptill b Grant Elliott 0(1)!

Live Cricket Score, Pakistan 62/5 in overs 10, BATTING: Sarfraz Ahmed 25(23), Shahid Afridi 1(4): Pakistan lost yet another wicket and they are in the back-foot  now. They have lost 5 wickets and Afridi is at the crease now. He is the only player who can save them from a defeat but needs a good partner at the other end.

Live Cricket Score, Pakistan 38/4 in overs 5, BATTING:Safraz Ahmed 10(10) Umar Akmal 0(0): A terrible start from Pakistan as they are losing wickets very frequently. Only 5 overs gone and they have lost 4 of their crucial wickets. Pakistan urgently needs a good partnership here and some good runs on the board. These two batsmen need to contribute majorly. New Zealand are fully dominating the visitors.

Live Cricket Score, New Zealand 196/5 in overs 20, BATTING: Mitchell Santner 2(3), Corey Anderson 82(42): A very good last over from Mohammad Aamer as no boundary came in it. The target is definitely huge and Pakistan need some hard hitting to chase it down. They need not waste time and start trying and getting runs from the initial few overs. Every batsman will have to contribute towards the team total. Corey Anderson played beautifully today as he remained unbeaten at 82.

Live Cricket Score, New Zealand 129/2 in overs 15, BATTING: Grant Elliot 4(7), Corey Anderson 36(23): Another bad news for New Zealand as Ross Taylor retires hurt. Grant Elliott is at the crease no and he has the potential to turn the game around with his batting. The boundaries are short and it’s easy to score here at Wellington, so a score of 170 can’t be called safe here. The hosts need to look forward to put up something close to 200. On the other hand, Pakistan are going great. If they manage to restrict New Zealand within 160, the batsmen can take care of the rest.

Live Cricket Score, New Zealand 110/2 in overs 12, BATTING: Ross Taylor 6(4), Corey Anderson 22(12):And a huge blow for New Zealand as their skipper departs for 33. Wahab Riaz gets wicket as Shoaib Malik took the catch. Pakistan bowlers are doing great while NZ need a good partnership here to take the score to a good total.

Live Cricket Score, New Zealand 74/2 in overs 9, BATTING: Kane Williamson 15(1), Corey Anderson 2(3): And Pakistan are back in the game! A brilliant work by young Mohammad Rizwan and Munro is run out for 4. Big blow for the hosts as Munro is one of the most consistent players currently for them and has the potential to add significant amount of runs.

Live Cricket Score, New Zealand 57/1 in overs 6, BATTING: Kane Williamson 15(1): Finally a breakthrough for Pakistan and a big one as Shahid Afridi once again comes to the rescue. Danger-man Martin Guptill goes for a 19-ball 42. Umar Akmal takes the catch at midwicket. Pakistan looking to make a comeback in the game whihc was so far dominated by New Zealand.

Live Cricket Score, New Zealand 57/1 in overs 6, BATTING: Kane Williamson 15(1), Martin Guptill (): And Guptill starts off with a boundary.The player looks immensely confident and consecutive boundaries are coming from his bat. Finding the gap rightly and punishing the Pakistan bowlers for their mistakes. The first over added 16 runs.

“A very nice gesture from both the teams as they spend a moment of silence for the victims of Bacha Khan University attack.”

The toss, as it happened:

TOSS: Pakistan won the toss and elected to bowl first!

In the second T20I, it was raining records as the Kiwi pair of Kane Williamson and Martin Guptill smashed all records to register the highest stand in T20I cricket. Williamson and Guptill added as many as 171 runs for the first wicket — a world record — that helped their side to level terms with Pakistan in the second game.  Batting first, Pakistan had scored 168/7 but their total was not enough to keep them on the top in this series. New Zealand vs Pakistan 2015-16, 3rd T20I at Wellington, Preview: New Zealand-Pakistan face off in series decider

The game will be crucial for more than one reason, for the hosts. It not only provides them an opportunity to seal a series win but this is their final T20I before the ICC World T20 2016. The tournament will be held in India from March 8 to April 3, 2016 in India. New Zealand and Pakistan will be involved in a three-match One-Day International (ODI) series, post the conclusion of the T20Is. 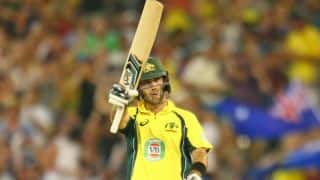 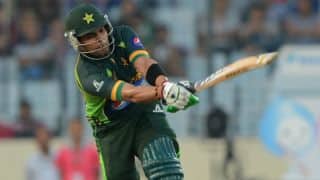