Joe Root had some back trouble during his innings.

Joe Root, who had an injury in the back during batting on Day One of the Ashes fourth Test at Trent Bridge, was attended by a physio with some painkillers and treatment on his back. Root and Jonny Bairstow, who are on the crease at present, have piled more than 50 runs, with England on 152 for 3 after bowling out the Australians for an awful 60 in 18.3 overs. Stuart Broad, Mark Wood and Steven Finn were among the wickets as they thoroughly destroyed the Australian top order without breaking much sweat. Live Blog: England vs Australia, The Ashes 2015, 4th Test Day 1

Broad wasted little time in picking up his 300th wicket as he did so in the third ball of the innings to dismiss Chris Rogers for duck, which happened to be his first ever duck in Tests. Broad went on to become the first player to pick up five wickets before lunch on Day One of a Test match. Broad also became the first bowler in the 138-year old history of the sport to take 7 (let alone 8) wickets before Lunch on Day One, in other words, the first session of a Test. In fact, as per Charlie Davis researches, only two men Tom Richardson and Graham McKenzie had taken 6. Live Scorecard: England vs Australia, The Ashes 2015, 4th Test Day 1

Alastair Cook s decision to put the visitors to bat first worked well for the hosts, who are leading the series 2-1 and with a win at Trent Bridge will seal the Ashes 2015 for them and also Cook will become the first English cricketer to feature in 50 Test wins. 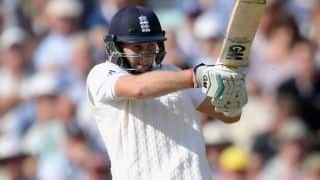